Home News AFC silent on accusations of race-baiting by Trotman

-Ramjattan refused to comment; “write what you want”- Patterson
The leadership of the Alliance For Change (AFC), one of the political parties in the coalition government is mum as accusations of race baiting by its co-founder and Minister of Natural Resources Raphael Trotman surfaced.
Political commentator and ardent supporter of the AFC Freddie Kissoon accused Trotman of allegedly playing the race card during a public meeting in Bartica, Region Seven (Cuyuni-Mazaruni), during the lead-up to just-concluded Local Government Elections.

Kissoon alleges he is in possession of a tape with Trotman appealing to race while campaigning in Region 7.
According to Kissoon, Trotman’s speech was “hate-filled” and it “manifested the cruelties and sadism of old political culture.”Kissoon expressed that Trotman “does not belong to the future of politics in this tragic land and that goose bumps emerged on my body when Trotman went into his demagogic rage of ethnic loyalty.” Kissoon called on AFC to ensure disciplinary actions are taken against Trotman. Kissoon said he submitted a copy of the tape to the party but when contacted on Saturday, AFC leader Khemraj Ramjattan refused to comment on the matter.   “I don’t do any interviews with >>>Guyana Times,<<<” Ramjattan declared, and hung up his mobile phone. Also contacted was AFC general secretary and Public Infrastructure Minister David Patterson who also refused to comment on the matter stating, “no comment, you could write what you like.”Meanwhile political commentator and former government minister Dr Henry Jeffery when asked his opinion on the issue, said he would first like to receive a transcript of the tape before commenting.However he stated that, “if what he (Kissoon) said the tape said and it’s correct, it is somewhat damning.”

Prodigal son returns
Kissoon noted too that in the tape, which was made available by a senior member of the Team Legacy political party, Trotman indicated that he has rejoined the People’s National Congress Reform (PNCR).“He openly told the crowds that although he was a part of the AFC, he never left the struggle and that the Prodigal Son has returned,” Kissoon highlighted. He added that Trotman said that a decade ago while he was launching the AFC with Ramjattan, Trotman evidently had a meeting in Nassau, The Bahamas with David Granger (now President), where they hatched a plan to reinstall the People’s National Congress (PNC) in office by ousting the People’s Progressive Party/Civic (PPP/C).“He then told the crowd that 10 years ago, he and David Granger met in Nassau (The Bahamas) and Granger laid out a plan for Guyana. On the day in 2015 when the election results were made known, Trotman indicated that Mr Granger called him and said to him, ‘Raphael, this is Nassau.’

Trotman left the crowds in suspension because he thinks that it is President Granger that should be the first one to reveal what the two of them dialogued on 10 years ago in The Bahamas.
“I don’t have a clue what it is but whatever it is, I would suggest you listen to the tape, and when you hear Raphael Trotman speaking at that Bartica LGE public meeting, then what was spoken and planned in The Bahamas 10 years ago has to be frightening, because Trotman doesn’t come across as a powerful politician that will shape a progressive future for Guyana,” Kissoon added.  Team Legacy chairman Ewart Williams when contacted, distanced his party from the recording and the views expressed by Kissoon.

According to Williams, whoever provided Kissoon with the copy of the tape clearly did so in his own personal capacity and not on behalf of Team Legacy. 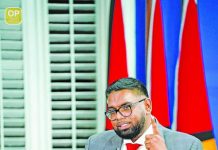 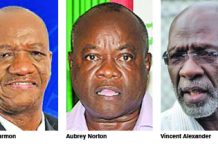 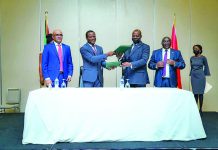