Dear Editor,
Guyana can be regarded as a cash-based economy because the majority of private-sector retail and commercial payments are made in cash or near cash. Thus, the need to examine the impact of public deposits on economic performance is essential. Public deposits, in this case, denote the size of deposits of the central government at the Bank of Guyana. Its main source would be from taxes collected.
Therefore, the dynamics around public deposits are frequently seen as a measure of how much the private sector is being crowded out of the economy. The pertinent question to ask is whether the private sector is being pushed out of its role as the engine of growth as the Government runs a growing overdraft at the Bank of Guyana. The answer will be – it depends. So let us look at the evidence and come to some conclusions.
Below is the Bank of Guyana’s Balance Sheet as of October 9, 2019, which highlights that the public deposits are at a NEGATIVE balance of GY$70.8 billion. When compared to June 2015, Table 1.2 of the Bank of Guyana Report (Statistical Abstract) illustrated that this figure was a POSITIVE GY$8.5 billion. The arithmetic will inform you that there was a deterioration in public deposits totaling GY$79.3 billion. 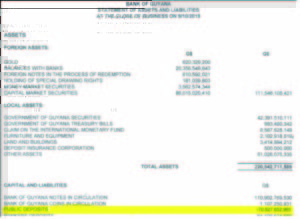 To reinforce this point, the IMF had put out official statistics in 2018 that informed us of this adverse development. The general theme of their concerns can be represented in the graph below which shows a trajectory that the overdraft at the Bank of Guyana is on course to top 9% of the GDP by New Year Day 2020. Is this a gift or a burden?;

The IMF, in their 2018 Staff Report, recommended, and I quote: “Staff reiterated and stressed the importance of settling these balances at the central bank, which the authorities agreed to do in the short-term through the issuance of Treasury Bills”. The facts disclose that after almost 18 months, the Bank of Guyana has not settled these balances by issuing Treasury Bills. Is there inadequate liquidity in the banking to absorb this debt and therefore the Central Bank will have no recourse but to print new dollars to facilitate the IMF’s recommendations? Is this an attempt to hide this GY$70 billion in domestic debt from the official figures?
There are three vital issues here. First, the official debt figures reported by the Ministry of Finance is GY$70 billion (approximately US$330 million) short. Second, if this trend continues, by the time the elections are held on March 2, 2020, a two-year supply of oil revenues would have already been spent, never to return to the coffers and people of Guyana. Third, this rapid increase in debt will be a drag on the economy as more of the national income will have to be assigned to debt service payments.
In the Half-Year Report for 2019, the Ministry of Finance reported that “In the first half of 2019, total public debt service payments increased by 17.3 per cent, from US$44.3 million in the first half of 2018 to US$52 million, mainly as a result of a 96.9 per cent rise in domestic debt service payments. For the first half of 2019, total public debt service as a share of government revenues was 9.4 per cent, compared to 8.5 per cent for the first half of 2018.
Yet, I cannot find one media house reflecting on this national tragedy of a gargantuan scale. It is policy actions like this in the 1980s that marched Guyana into a status where it was considered as “bankrupt and un-creditworthy” which then led to the ERP that brought many empty rice pots into the kitchens of many Guyanese homes. Some may say that the oil wealth over the next 40 years of close to US$58 billion will solve all these ills but if the 2020 and 2021 supply of that oil cash is now gone forever, the access to this positive oil flow would have been deferred to 2022— bringing no relief to the people of Guyana before then.
In the final analysis, this reckless strategy by Mr Granger and his team will introduce great economic harm to our people for years to come.

Tactics of intimidation and fear will not work