Home Features “Cancer takes a part of you, but there is a life after...

For many people, cancer means a death sentence. It means that if they don’t fight hard, then they would be conquered by this illness that rips millions of lives apart. However, for some, they have no other choice than to beat this parasite of an illness because they cannot leave their lives in the balance.

For 48-year-old Nicola Schultz when she was diagnosed with cancer, she was sure about the fact that it meant she would have lost a battle. However, fate had another plan for her and with her willpower, she can now say that the long battle is somehow concluding.

Nicola was diagnosed with cancer of the thyroid. It all started when she discovered a lump in her throat in 2010. However, her doctors informed her that she had an overactive thyroid and it could be dealt with via treatment. “I was diagnosed with an overactive thyroid in 2010; after a few weeks, I saw swelling in my throat and people were saying that it was goitre and all of that but I really didn’t take it for anything. But I was reading in a newspaper and they were talking about thyroid cancer and realised that I had the similar symptoms they were talking about. I called my doctor the next day and he said I can come in. When I went to him and right away he said I should do some follow-up checks and so and when I took the results, he confirmed it was what I suspected.

“He advised that I should do surgery as early as possible and I agreed. I did the surgery in October 2014. And when they opened up, they saw the cancer had spread so they took out the entire thyroid gland and sent it for a biopsy and it further confirmed it was cancer. I felt like it was a death sentence and I started crying saying that I am only 43 years old and how can this be possible. My daughter was pregnant with my second grand and all of that. But my doctor told me that his mother had the same thing and she had been a survivor for over 19 years,” Nicola related. 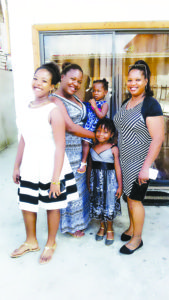 Nicola’s doctor then advised her to visit the Cancer Institute of Guyana located in the compound of the Georgetown Public Hospital. She went there and met with Dr Sian Chakraborty, who tested her to confirm the diagnosis.  Upon confirming the diagnosis, Dr Chakraborty advised that she would require treatment but the treatment was not available in Guyana.

Nicola was told that she would have to travel to the United States or Trinidad for treatment. She chose the latter because of the cost factor.

“Dr Omar Khan in Trinidad did a full-body scan in June 2015 and they found that they were capable of treating me. I am taking the 131 iodine radiation and it is not available in Guyana. When I first started I went like three times in six months, I would have to go to Trinidad and the radiation is working so in 2017, I was 80 per cent clear and last year and this year I came back clear, but I have to go back next year (2020) before I can be free of cancer.

“But for the first when I went to Trinidad, it was very hard for me. I was in isolation for three weeks and it was hard and I still need to do another dose of radiation before I am completely cancer-free, but I am a survivor right now.”

For now, every day for the rest of Nicola’s life begins with her taking a pill to induce the creation of thyroxin because the absence of her thyroid gland prevents the production of the hormone.

“Being diagnosed with cancer, everybody thinks the worst. For me it was early detection, so with the treatment I could have been helped and then I did not really have much support other than my children and grandkids. My boss was also a major support for me, because they facilitated my treatment and ensured that I never missed a clinic date. Support is an important thing,” she notes.

Nicola advises that “everybody should get their check-ups. Early detection saves a life because cancer changes everything. Cancer changes your life. I thought I had gotten a death sentence, but I tell people now to use me as an example, because there is a life after cancer. Go early, get help, and have that support.” APNU/AFC boycotts debate on reversal of its draconian taxes on ordinary...