The Guyana Elections Commission (GECOM) is one step closer to announcing a date for the recount of the March 2 polls, with the arrival of a special team of scrutineers fielded by the Caribbean Community (Caricom).

The team landed at the Eugene F Correia International Airport, shortly after 15:00h on Friday — one hour later than their originally scheduled arrival time — and is led by Senior Lecturer in the Department of Government at the University of the West Indies (UWI), Cynthia Barrow-Giles.
The three-member team also comprises Commissioner of the Antigua and Barbuda Electoral Commission, John Jarvis and Deputy Supervisor of Elections of St Vincent and the Grenadines, Sylvester King.
The delegation was met by a team of health officials at the airport and were received by Caricom Ambassador Colin Granderson before being whisked away to a city hotel.
Two buses operated by the Caricom Secretariat, along with Police escorts, transported the officials from the taxiway of the airport, presumably to avoid the corps of media operatives, photographers, and videographers that had gathered for their arrival.

Credible and transparent process
Prior to the delegation’s arrival in Guyana, Caricom Chair, Barbadian Prime Minister Mia Amor Mottley, in a public statement, called “on all concerned, to ensure a credible and transparent recount process in order to provide legitimacy to any government which would be sworn in as a result”.
According to Prime Minister Mottley, “this (recount) process must be completed without further delay”.
Barrow-Giles was a member of the high-level team that came to Guyana in March to participate in the first scheduled recount, which had to be aborted as a result of a court challenge to the recount process.
That litigation was filed by coalition candidate Ulita Grace Moore with legal representation provided by a battery of A Partnership for National Unity/Alliance For Change (APNU/AFC) Attorneys led by Senior Counsel Roysdale Forde.
According to the Caricom Chairperson, the other members of the team that had travelled to Guyana in March were unavailable for the present mission.
Additionally, it was recognised that both Jarvis and King participated in the Caricom Electoral Observer Mission for the March 2 elections.
The delegation’s flight on a Trans Guyana Beechcraft, in addition to accommodation, is being paid for by the Canadian Government.
Caricom, in a letter to GECOM ahead of the team’s arrival, had indicated that provision had been made for the members of the team to be tested in their respective countries, using the World Health Organisation (WHO)-approved PCR COVID-19 test.

This condition had been put in place by the  National COVID-19 Task Force, which is chaired by caretaker Prime Minister Moses Nagamootoo, at the insistence of caretaker President David Granger.
He overturned an initial decision by Nagamootoo to have the members of the team be subjected to a mandatory 14-day quarantine on arrival in Guyana, but Granger changed that to having them be tested in their home countries before arrival.
No similar condition or requirement has been placed on any of the scores of other persons who are expected to be taking part in the recount process.
The Arthur Chung Conference Centre (ACCC) next door to the Caricom Secretariat has been approved as the venue.
A decision has already been taken by GECOM — based on diktats handed down by the COVID-19 Task Force — to have the number of persons taking part in the recount process limited to 132 using 10 counting stations.
This is in order to facilitate social distancing protocols that have been put in place by the Administration through Emergency COVID-19 Measures announced in a Public Health Ordinance issued by Granger in early March.

Meeting today
With regard to the recount, GECOM has finalised a work plan and has scheduled a meeting with representatives of each of the contesting political parties in order to solicit any final input today at 10:30h.
The Commission will then meet with the Caricom team at noon.
Additionally, with the arrival of the team, GECOM is now expected to publish in the Official Gazette an Official Order for the recount indicating a starting date.
GECOM’s Secretariat on Thursday conducted a simulation/training exercise involving the staff to be used — inclusive of Returning Officers — at the ACCC for the recount.
Some 80 personnel had taken part in the one-day exercise.
While only 40 persons from GECOM would be allowed in the vicinity of the counting stations at any given time, it is the intention of the Commission to have the staff work on rotating days hence the need to train 80 persons for the exercise.
According to GECOM’s Public Relations Officer Yolanda Ward, “the intent in keeping with the Coronavirus Disease (COVID-19) guidelines is not to have the staff work every day, but on a rotational basis and also to have staff on standby to ensure that we don’t have any slippage or pause in the process.”
“The process this (Thursday) morning is basically to go through the methodology that has been developed for the recount to apprise the staff of the procedure that it entails and actually to give them a walkthrough as to their respective stations that they will be at.” 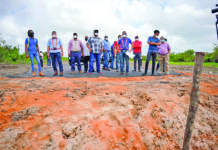 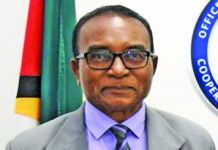 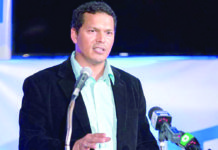