Unlike the art of ancient Egypt, India, and Babylon, that of China has developed without interruption from antiquity up to the present. Chinese art is richly diverse and highly comprehensive, encompassing all forms and styles. Entering the treasure house of Chinese art is the start of a marvellous journey through calligraphy, painting, sculpture, architecture, music, dance, drama, film, crafts and folk arts.

Traditional; chinses painting uses brushes to apply ink wash and pigment to think silk or paper, which is then mounted on scrolls. This form of painting attaches the highest importance to fluidity and expressiveness of line, and is deeply influenced by calligraphy. This is because both art forms utilize essentially the same tools as well as similar brushstrokes. Traditional Chinese artists use minimal line to portray their subjects. Representing form is merely the basis for revealing essence. Even today, students of traditional Chinese painting practice brushstrokes as part of their training.

Although early Chinese painting was primarily religiously oriented, it was imbued with a real-life atmosphere and generally used people as its subject material. Starting in the 7th century AD, during the Tang Dynasty (618-907 AD), Chinese painting started to be influenced by philosophical thinking. Advocating harmony between Humanity and Nature, the new school of painting called for breaking the bonds of concrete imagery, and rather using symbolic themes to represent the interior world. As a result, subject matter gradually changed from religious figures to natural scenery, including “mountain and water” landscape painting and “bird and flower” genres.

Along with this change in thematic content, an increasing number of artists emerged who were outstanding in both painting and calligraphy. The brushwork inscriptions that started to appear on paintings at this time were an expression of the merging of the two art forms. These inscriptions described the theme of the painting, using highly poetic language and beautiful calligraphy to deepen the appeal of the work. 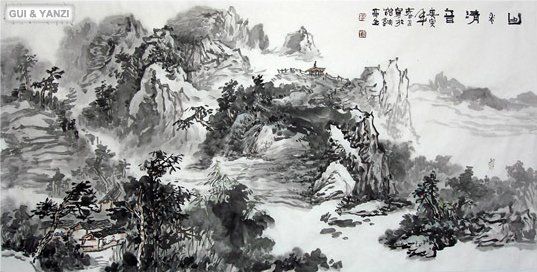 Classical Chinese artists believed that paintings should not be limited by the actual colour of their subject matter. For instance, bamboo could be portrayed using only black ink. As a result, the use of colour decreased and painting solely with ink became increasingly prevalent. Ink wash painting made full use of the tinting and bleeding effects that could be achieved with brush, ink and water, transcending the limitations of realistic colour and offering artists greater creative freedom.

Following the Tang-Song period (612-1276 AD), “mountain and water” landscape became one of the primary genres of Chinese painting. Unlike Western painting, traditional Chinese painting does not employ a single focal point. Rather, most Chinese landscapes utilize a shifting perspective to portray a continuous sweep of connected views, such as mountains and rivers or along city street. These paintings, mounted on long horizontal or vertical scrolls, allow the viewer to appreciate panoramic vistas that cannot be seen from a single perspective. 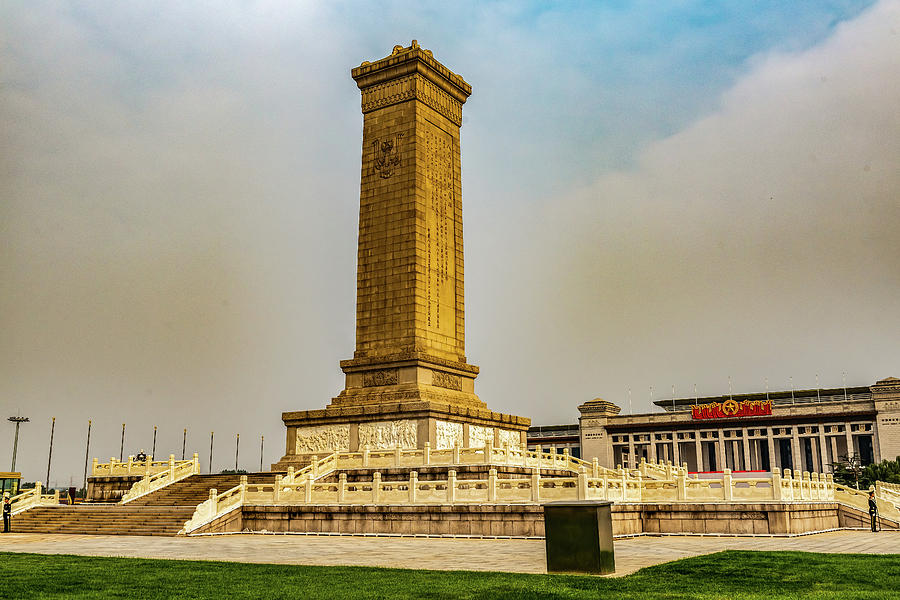 The Monument to the People’s Heroes in Beijing’s Tian’anmen SquareContemporary Chinese painting, influenced by the ideas and techniques of Western art, gave rise to reforms in traditional chinses painting and brought a new infusion of vitality to the genre. The works of artist Xu Beihong (1895- 19-53 AD) are representative of this trend. The emergence of new schools of realists painting, deeply imbued with the spirit of popular life, also exerted a strong influence on traditional Chinese painting. As these transformations occurred, Chinese artists drew from the combined spirits of Chinese and Western art to create new styles of oil painting that preserve the unique features of traditional Chinese art. The delicate waterscapes of contemporary painter Wu Guanzhong (b. 1919) are a case in point, bringing a vision of classical beauty to the eye of the modern viewer.

“Sculpture is the forerunner of all art.” This saying truly describes the Chinese sculptural arts. Jade carvings of people, pottery figurines of young women, and sculptures and carvings of animals appeared in China as early as the Neolithic Age (c. 12,000-2000 BC). As china flourished and became more powerful, the spirit of its magnificent culture directly invigorated the sculptural arts. The mighty underground terracotta army of Qin Shihuang, the first emperor of the Qin Dynasty (221-207 BC), as well as the massive and majestic Buddhist sculptures of the Yungang and Longmen grottoes, have all served to bring China’s extraordinary sculptural tradition to the eyes of the world.

Discovered in 1973, the terracotta army of Qin Shihuang, the first Qin emperor, bears witness to the extraordinary level of early Chinese sculpture. The army includes a wide variety of soldiers, no two alike, all with highly realistic carved faces and unique expressions. These figures must have been created by a large number of artisans otherwise the figures cannot display such richly varied technique.

The statues found in China’s grottoes and temples represent the epitome of traditional Chinese sculpture. These sculptures often feature beautifully carved clothing, and skillfully portray the form and dynamism of their subjects. Chinese carvings of Guanyin, the Buddhist goddess of mercy and compassion, with her exquisitely draped robes, kind and loving gaze, and quality of sanctity and serene beauty, rival Raphael’s paintings of the Sistine Madonna.

The concepts and techniques of Chinese sculpture continued to develop during the 20th century. The Monument to the People’s Heroes in Beijing’s Tian’anmen Square is one of the representative works of modern Chinese sculpture. The monument consists of ten engraved panels, each of which represents a certain historical event. Each engraving can stand on its own, while taken as a whole, they offer a comprehensive depiction of China’s revolutionary history. (Ministry of Culture Peoples Republic of China)