His Excellency Dr Mohamed Irfaan Ali, minutes ago, swore in Dr Ashni Singh as a Senior Minister with responsibilities for Finance under the Office of the President.

Dr Ashni Singh took his oath in the presence of Cabinet Ministers and other Government officials at the ceremony at the Office of the President.

The Office of the President will retain its oversight role, but Dr Singh will have responsibility for Finance.

The Head of State said Dr Singh will be part of the team to oversee the transformative agenda of Government which includes: projects, programmes and policies that will stimulate growth, expand the country’s economic base and strengthen existing sectors. 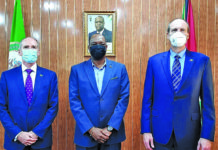 Flaring among issues raised by Opposition during meeting with ExxonMobil