…as affected citizens grapple with losses

Leaders of the Opposition People’s Progressive Party (PPP) on Sunday met with residents of several communities across the country, who were affected by severe flooding caused by unusually high tides over the weekend.
Opposition Leader Bharrat Jagdeo was joined by members of the party as he interacted with and comforted the flood victims.
In a statement on his Facebook page, the Opposition Leader said they have seen firsthand, the suffering of citizens, whose homes are flooded and who are also discomforted and had their livelihoods disrupted.
“Many have suffered untold damage to personal and other items and may never recover from the devastation brought about by this unfortunate situation,” he stated.
Jagdeo called on the Civil Defence Commission (CDC) to take immediate measures to bring relief to those who are suffering.
Additionally, he said that the PPP has extended its full support to those State agencies that are entrusted with the responsibility of bringing necessary relief at this time.
On Saturday residents in several coastal villages across the country were under water as a result of overtopping caused by unusually high tides.
Director General of the CDC, Lt Col Kester Craig on Sunday said communities in Regions Two (Pomeroon-Supenaam), Three (Essequibo Islands-West Demerara), Four (Demerara-Mahaica), Five (Mahaica-Berbice) and Six (East Berbice-Corentyne) were affected by the current unprecedented high water.
Nevertheless, he noted that the CDC, through its 24-hour National Emergency Monitoring System (NEMS), is monitoring the situation and is in contact with all the regional administrations that activated their Regional Disaster Management System and is conducting assessments and updating the Commission.
In addition, the Commission is coordinating with key agencies and Ministries including the National Drainage and Irrigation Authority (NDIA) and Public Infrastructure Ministry. He said too that an additional team will be deployed to the affected regions to augment their response mechanism and continue the response that commenced on Saturday in Region Three and in Region Five on Sunday.
On Saturday residents along the West Coast of Demerara woke up to flooding from overtopping early that morning and then again later in the afternoon. The villages affected are Blankenburg, Den Amstel, Fellowship, Cornelia Ida, Anna Catherina, and Uitvlugt Oceanview.
Then on Sunday Parika was under water. As a result of the high tide, the Essequibo River overflowed, flooding nearby coastal communities and the Parika Stelling and surrounding facilitates.
Meanwhile, over in Region Five, an eroded sea dam at Dantzig, Mahaica, threatened homes and more severely, hundreds of acres of rice. By Sunday, however, the breach coupled with severe high tide caused intense flooding in the coastal communities in the region.
The CDC on Sunday said the height of the above normal high tide was approximately 3.31 metres. It was noted that over 200 metres of the Dantzig sea defence dam has been compromised.
As such, a five-person team was deployed to the communities of Dantzig, Columbia, Glazier’s Lust, Fair Field, High Dam and Prospect. A rapid assessment in collaboration with the Region Five Regional Democratic Council (RDC) was conducted across the communities and found that seven families experienced floodwaters in their homes.
The CDC added that several small scale subsistence farms and livestock including poultry were also severely affected. Further, over 10 rice cultivated plots were inundated with saltwater.
Nevertheless, as in Region Three, the flood-affected families in Region Five were also provided with cleaning hampers.
However, Region Five Chairman, Vickchand Ramphal told Guyana Times that floodwaters had reached four feet in some areas, while other residents have reported up to 18 inches of water in their homes.
Ramphal explained that one year ago, he wrote to the Public Infrastructure Minister, David Patterson, explaining that a breach had already occurred and the sea defence and the community were under threat. He also mentioned that this was highlighted in several newspaper articles but shortly after, the Regional Executive Officer (REO), David Morrison, was on national television refuting his claims.
He said if the Public Infrastructure Ministry had paid attention to his complaints, much of the damage could have been avoided.
Furthermore, the Regional Chairman also blasted the Mahaica Mahaicony Abary-Agricultural Development Authority (MMA-ADA), which has also failed to pay heed to his complaints about threats and dangers to livelihood that the breach could cause. He said he had implored the agency to pay urgent attention to the fragile sea defence over a year ago to no avail.
Ramphal said that he managed to get on to the MMA-ADA Head on Sunday but had he responded earlier then the severity of the flooding and most of the damages it caused could have been avoided.
“The Government has failed to put systems in place to properly manage and do remedial work to the sea dam and Dantzig-Prospect area. There are over 500 acres of rice that is under threat because the temporary dam south of the sea defence to prevent the water from getting on land has broken away. However, since the tide is up and there is further deterioration of the sea dam and breaches, the water has now caused that temporary dam to also erode at some sections and the water is getting into cultivated land,” the Chairman stated.
Meanwhile, residents in these affected coastal areas are being advised that the above normal high tide warning remains in effect until October 2, 2019, and as such, precautions must be observed at all times. To this end, residents were provided with sandbags, and in some cases, sand, to make the bags to use as protective barriers.
In addition, the Public Infrastructure Ministry and the NDIA have provided excavators to broaden channels to alleviate some of the floodwaters. 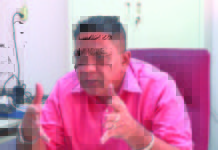 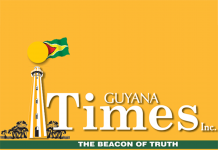 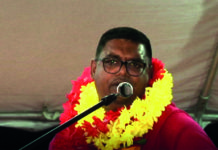 Citizens have every right to suspect GECOM’s intentions

We demand a return to the original polling places