Home Top Stories PPP will not be deterred by treats – Jagdeo

threats staged to intimidate the party as the welfare of Guyanese is of utmost importance.
This comment was made by Opposition Leader Bharrat Jagdeo during a walkabout around Stabroek Market Square on Friday to address concerns of the vendors.
Accompanied by top leaders of the party, Jagdeo sought to speak to the disgruntled vendors who engaged him, voicing their many concerns, especially about the recent “anti-business” actions by the Mayor and City Council (M&CC).

“They need to clean the city in a way that allows the people to still make a living, and they can do that. They can meet with people and talk to them and have them prepare for changes, not go one day and pull down their stalls. It is this heavy-handed approach that this Government is known for.”

Jagdeo assured that his party will address the concerns of the people, noting that the city needs to be cleaned, but at the same time, the livelihood of the people matters greatly.
However, the walkabout was not without interruptions as a group of about 15 persons presumably organised by members of the APNU/AFC with intent to disrupt the proceedings, verbally abused the Opposition Leader.
A widely known APNU/AFC activist called ‘Bull Dog’ who made headlines in March last for assaulting a Benschop supporter during the Local Government Elections campaign, verbally abused Jagdeo and his team.
In the process, he openly pushed at anyone who tried to interact with the Opposition Leader.
As the team walked into the Parliament View Mall, where the relocated vendors are now situated, they were met with chants of abuse from the group and others following them. People were appalled by the behaviour of this crowd especially during this 50th Independence period.
Following the walkabout a press conference was held where Jagdeo said controversy was to be expected, especially at the market area: “Going out, I said to my colleagues that we have to expect controversy because I knew what was going on there.”
He divulged that the walkabout was undertaken after the party was approached by a number of vendors who were being intimidated by ‘thugs and activists’ of the current administration.
“Today we saw a display of that, as about 15 of them who were clearly with political directions to disrupt the opportunity of people who are faced with severe hardships, raising their issues with me.”
The Opposition Leader assured however that despite the interruptions, the cries of Guyanese have been heard.
He noted that the attempts being made to “bully” the people and deter them from voicing their concerns will not be successful: “I want to assure all those people who have encountered difficulties, the taxi drivers, the vendors, the people who are plying their trades there, that we have heard their cries even though they couldn’t raise them with us today, this attempt to disrupt and bully people will not deter us, we will not be deterred from fighting for this country and fighting for what is right for the people.”
He noted that as the President and Prime Minster refused to meet with the people, they are disrupting any attempts made to engage them.
This, Jagdeo said, shows the “desperation” of the government who will not talk to the City Council to ensure that the people are being treated with respect. He explained that the current administration have not given directions to the City Council to ensure that though they clean the city, they do so with a conscience.
“They need to allow people, who have been plying their trade for 20, 25, 30 years around the market square legally, lawfully, those who have loans to pay and children to feed, to continue to earn a living, too.”
The ‘destructive’ actions by the M&CC Jagdeo explained, have been disguised as ‘a cleanup’.
“Under the disguise of cleanup, everything could be done now, the destructive behaviour of the city council pulling down people’s stalls and sending them into areas where nobody goes.”
According to the leader, his party is not opposed to having the city cleaned but added that this needs to be done in a balanced manner.
“They need to clean the city in a way that allows the people to still make a living, and they can do that. They can meet with people and talk to them and have them prepare for changes, not go one day and pull down their stalls. It is this heavy-handed approach that this Government is known for.”
Jadgeo noted he is satisfied with the walkabout as it demonstrated “that people have real concerns about the Government and secondly that the regime is getting desperate seeing that they had to resort to its activists and thugs.” 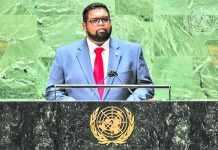 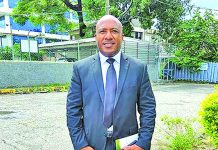 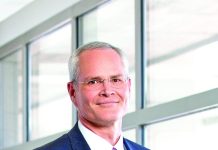