With “Indian Arrival Day” some two weeks away, and against a background of 7000 mostly Indian Guyanese fired sugar workers struggling to survive at Wales, Rose Hall, and Skeldon, we revisit the devastating conditions that brought Indians here as immigrants.
Sadly, after the depredations of the PNC — starting from the 1970s — had worked to replicate those conditions, a second migration of Indian Guyanese to the Caribbean, Suriname, Venezuela, the US, Canada and elsewhere was initiated; and this has again become intensified.
Deteriorating conditions in Venezuela have forced several thousand Indian Guyanese persons and their children to return, and they have added to the struggle for survival in the rural areas.
Most of the 19th century immigrants – some 90 per cent – originated in the Bhojpuri belt of the United Provinces (now Uttar Pradesh and Bihar), while the remainder came from the Madras Presidency. The question arises as to why these persons left their country when their customs forbade “crossing the “Black Waters” (Kala Pani)”, which made them lose their place in the community. The short answer is: it was ultimately a matter of life and death, and they chose life, tenuous as that would become.
While “indentured labour” might today be seen as a transitory passage of commercialised human labour from African chattel slavery to the so-called “free labour” of today, the conditions that herded Indians into that option were man-made. The sugar planters had no faith that free Africans would sell their labour at a rate to make sugar profitable. They therefore actively sought a new supply that would guarantee such cheap labour on demand. But where would such rates exist that could not attract freed slaves but yet be a “pull factor” for indentureship? The answer was British India.
The story begins in 1757, when the troops of the British East India Company captured Bengal from the Moguls and completed their inexorable conquest of the legendarily rich India within 50 years. Less than a decade later, between 1768 and 1771, from Bengal and Bihar – from where most Guyanese immigrants originated – more than 10 million persons, one third of the population, died from a “famine”. Why? Two reasons. Firstly, the farmers who supplied the bulk of the population with foodstuff were forced by the British into producing cash crops for export, even while they were forced to pay onerous taxes at the threat of death and violence. Remember “Lagaan”?
We quote the words of then British Governor Warren Hastings, who boasted to the Home Office: “Notwithstanding the loss of at least one-third of the inhabitants of the province, and the consequent decrease of the cultivation, the nett collections of the year 1771 exceeded even those of I768… It was naturally to be expected that the diminution of the revenue should have kept an equal pace with the other consequences of so great a calamity. That it did not was owing to its being violently kept up to its former standard.”
The cash crops the farmers were forced to grow included cotton, opium, indigo; and as described above, this was simply to keep paying off the extortionate demands of the British, who exported rice and wheat even during the famines. Millions were also thrown out of work when the British forbade Indian weavers from producing cotton yarn and the cotton fabrics that had enthralled Europe. Henceforth, only cotton woven by British looms could be sold in India! From where were the weavers to get the money to buy food, much less clothes?
Incidentally, Britain became the largest drug dealers up to the present, where the opium – up to 800 tons annually – was shipped to China so that the British could buy Chinese tea for their ”cuppa”, sweetened by our sugar.
Between the Bengal famine of 1768 and the end of Indentureship in 1917, conservatively, over 54 million Indians perished from famine. In the book “Late Victorian Holocausts” (2001), Mike Davis describes how Viceroy Lord Lytton insisted that wheat be exported to England. In 1877 and 1878, at the height of the famine, when 10.3 million persons perished, grain merchants exported a record 800,000 tons of wheat and 1.9 million tons of rice. As the peasants began to starve, officials were ordered “to discourage relief works in every possible way”.
And this is why the upsurge of indentured Indians correlated with the British-induced famines in India. And the closure of sugar estates by the PNC Government has history repeating itself today, as farce. 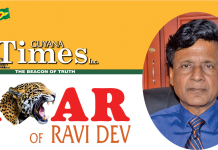 Hindus must respond to malaise of Hinduism

What, if not peaceful politics?

Opposition must move out of the past