There is always an element of risk whenever someone uses the roadways, be it a motorist, passenger, cyclist or pedestrian. This is somewhat inherent since it is believed that accidents will happen. Often, the fault is not with the one being cautious.
The risks may manifest in various forms such as a lack of street lighting while driving at nights, potholes— which, when swerved from, could place a vehicle in the direct path of another— absence of or non-functioning traffic lights, which can create uncertainty among drivers; roaming animals; speeding; drinking and driving; narrow streets and lack of traffic signage. In addition, disobedience of basic traffic etiquette and other rules exacerbate the risks.
Seemingly common now is the disrespect for designated major roads. Many drivers, including some within the public transportation system, refuse to adhere to what is mandatory. As a result, a number of accidents occur frequently at some of those points. Similarly, the practice of running red lights and the green signal that allows pedestrians to cross continues unabated, predominantly by minibus drivers. The danger that poses needs no explanation.
While there are a plethora of traffic violations on a daily basis, some appear more prominent. Undertaking and cutting in front of a vehicle and the sticking out of a minibus conductor’s arm to do likewise from the other side, seem the new norm of driving. Aside from the obvious danger, especially to young and inexperienced drivers and being an irritant, it is blatant bullyism and a potent source for road rage.
It appears that those who engage in such practices do not see themselves as being errant or what they do as a traffic violation. Lanes that allow for turning-on-red are abused and used as if it’s the right-of-way. In the city, many roads, other than what is authorised for minibus routes, are used as thoroughfares. Speeding is foremost causing areas that are supposed to be free of minibuses to become dangerous.
In addition, some drivers seemingly take pride in having an alcoholic beverage in their possession while transporting passengers. Adding to the woes of those who abide by traffic rules, they are verbally abused when trying to stave off a potential transgressor. These practices are not unknown to the Police and while they cannot be at all points where violations occur, there is the expectation for more and sustained intervention in the interest of safety to all road users.
This does not take away from the valiant efforts of a few dedicated traffic officers who do their best to curb the situation; one which has reached alarming proportions. Reportedly, many minibuses are owned by some Police ranks and the drivers are of the view that they have a free pass to break traffic rules. It is believed that traffic ranks turn a blind eye when they see violations first-hand by minibuses owned by members of the Force.
That obviously empowers those errant drivers and causes others to do likewise. Some time ago, a senior traffic officer, speaking a road safety fair, boldly proclaimed that no one is above the law when asked specifically about reports of violation by police ranks. That is heartening to hear and he must be commended. However, the follow-up question should have been how effective his action could be in the context of minibuses being owned by some of his colleagues.
In fairness to the Police, it did clamp down on tinted vehicles owned by some ranks. That shows that the Force seems willing to hold its own responsible. While that offers some level of optimism, it begs the question of why the unbridled traffic violations by some minibuses continue unchecked.
From all reposts, some traffic ranks can easily pinpoint a particular minibus based upon design and route when a complaint is lodged. That probably suggests that traffic violation is not unique to that vehicle. Again, it must be asked, how is it allowed to continue? One can assume that alleged pressure from within is responsible. Seemingly gone is the expectation of the example being set by those entrusted to ensure safety on the roadways.
What is desperately needed is a sustained national campaign to reduce traffic violations and let the law take its course on the errant ones regardless of who they are. The carelessness exhibited puts all road users at risk. This is where the National Road Safety Council would need to be supported and probably empowered to have a more visible presence and increased influence all year round.
It must be noted that drivers are not the only violators of traffic rules for some pedestrians are equally guilty. Aside from the common jaywalking, they cross busy intersections when not authorised and refuse to use the overhead pedestrian walkways, thereby, bringing danger to themselves and others. Like errant drivers, they seem empowered to not observe basic traffic rules. This will only change when there is a constant stream of violators up the stairs of the courts across the country. 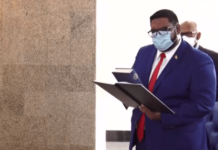 Let us get on with the declaration