Home News The Venezuelan claims to sovereignty: An assessment

Conflicting claims to territorial sovereignty in the “age of discovery” were normal in interstate relations. And while many of these claims were settled over time by arbitration and the courts, a few stubbornly persisted and remained unsettled to this day even though there were judicial rulings on many of them. One of these claims is the current “controversy” or “dispute” between Guyana and Venezuela over ownership of the Essequibo region. This short note addresses the legal standing of Venezuela’s claims to sovereignty.

Venezuela maintained and continues to maintain that its claims to sovereignty over the Essequibo region were derived from prior discovery, the Treaty of Tordesillas (1497) between Spain and Portugal, and succession.

Discovery:
International legal practice recognises twelve modes of territorial acquisition of which discovery is one. But not all of these twelve modes (discovery, occupation, accretion, conquest, erosion, avulsion, cession, abandonment, prescription, revolution, succession, and annexation) share the same degree of importance or carry the same weight among international jurists. Consensus revolves around only five of these traditional modes – cession, occupation, accretion, subjugation, and prescription. Discovery is not one of them. This mode of territorial acquisition is no longer relied upon to vest ownership or sovereignty, hence Venezuela’s continued reliance on discovery is jejune at best.
Venezuela claimed and continues to claim sovereignty over the Essequibo region as a result of the discovery of that region by Spain. Moreover, Venezuela has maintained that it had acquired Spanish rights by being a former colony of Spain, hence, the right of Spanish discovery was Venezuela’s by inheritance. Although the available historical data on Spain’s discovery is imprecise, scanty, and quite often conjured up, the legal implications relating to discovery are clearly distilled in the Isle of Palmas case. This landmark ruling has set the precedence for all future cases that are based on discovery as a mode of territorial acquisition.
The Isle of Palmas case involved a dispute between the Netherlands and the United States of America over an island located between the Philippines, at that time a part of US territory, and the Netherland Indies. In granting sovereignty to the Netherlands, the Swiss Arbitrator, Max Huber, held that discovery without further action on the part of the State claiming title through this mode vests no more than an “inchoate title.” In applying this line of legal reasoning to Venezuela’s claim, it is abundantly clear that Spain’s inchoate title did not develop with the passage of time into a definitive title given the Dutch and then the British occupation of Essequibo.
Mere discovery of territory is not a sufficient condition for the derivation of a definitive title. Discovery must be followed by further acts of settlement or occupation within a reasonable time. There is no evidence that Spain ever had a settlement in Essequibo (or other parts of Guyana) even though its corsairs tried to plunder Dutch and English settlements. Neither did Venezuela occupy Essequibo after its Independence from Spain in 1810. In sum, discovery does not give or confer an exclusive right to occupy unless that right is fully exercised. The historical record shows that Spain never occupied Essequibo and Venezuela never did after its Independence in 1810.

Succession:
Many Latin American scholars are fond of using the “succession” argument to support claims to sovereignty. Moreno Quintana, for example, offered the view that “the Malvinas (Falkland Islands) were an integral part of the Spanish dominion in America, which was then transmitted by the right of succession to the legitimate heir, Argentina.” Martinez Moreno went further when he opined that “when the independence of our nation was achieved, they [the Malvinas] passed into the national dominion by succession, and legitimate Spanish possessions and those of Argentina became united both in reality and legally.” Venezuela’s claim of succession is based on similar lines of argument.
To be able to apply the law relating to succession as a mode of territorial acquisition, it is absolutely necessary to have an understanding of the principle of uti possidetis juris. The “as you possess, so may you possess” principle was a Latin American doctrine devised to settle the colonial boundary problem legally and peacefully. According to this doctrine, the new Latin American states would have a territorial expanse which corresponded to the administrative division of the Spanish colonial empire. Moreover, this doctrine has remained a guiding principle among all the Hispanic-American states since 1810.
And by virtue of this principle (doctrine), the States in question would give reciprocal guarantees concerning territorial status. Thus, the principle of uti possidetis juris represented a right to succession of territory. It means, therefore, that Venezuela’s claim to Spanish succession based on this principle would only make sense and be a valid claim if Spain was in fact the undisputed possessor or owner of the Essequibo region. Spain cannot cede possession of a territory if it has no legitimate possession of the said territory.
At the time of Venezuela’s independence in 1810, Spain did not have title to the Essequibo region. If Spain did have title, then the uti possidetis juris principle can be applied. On the other hand, if Spain’s title was questionable and inchoate, then that of Venezuela’s under the succession mode would also be questionable and inchoate. It is very clear from the foregoing that the Essequibo region, according to the principle of uti possidetis juris, did not form part of the territory that Spain bequeathed to its former colony of Venezuela in 1810. Thus, Venezuela’s claim under the succession mode is at best terribly weak and void of any scintilla of puissance.
Over the past one-hundred-plus years, Venezuela has demonstrated a proclivity of challenging and at times not accepting arbitral rulings in matters relating to border claims and disputes. For example, it did not accept Spain’s 1891 ruling in a dispute with Colombia. It reluctantly accepted the 1899 Arbitral Award that favoured Great Britain. Sixty-two years later, it declared that Award null and void. It appears that political decision-makers in Venezuela have become lock-stitched in their own conceptual strategic straight jacket that precludes them from objective assessments of historical facts.
What does all this mean for Guyana and its case against Venezuela? It means that Venezuela has no legal claim to Essequibo by either of the two modes of territorial acquisition on which it premised its claim: discovery or succession, separately or together. This conclusion is supported by the 1899 ruling of the ICJ, which did not recognise any legal validity to Venezuela’s claim to Essequibo. But legal arguments are not the same as empty nationalistic claims taught to citizens as facts. Venezuela’s claim rests only on heightened emotion and irrationality and hence, it is ultimately a claim to the mineral wealth of Essequibo and nothing more. This wealth can only be exploited if the territory in which it resides is part of Venezuela. There is in fact a growing tendency among countries to flout international laws when national and strategic interests demand it. The question must be asked: What if Caracas decide to invade Guyana, not by military power but by encouraging and incentivising its citizens to move en masse into Essequibo? Then what? 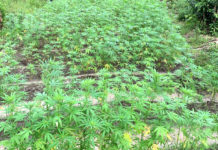 $13.7M worth of ganja unearthed along Canje River