Abishai Caesar, 36, of Tuschen, East Bank Essequibo (EBE) has been sentenced to death after he was on Friday last found guilty by a jury of three counts of murder over the killings of businesswoman Jennifer Persaud and her two sons.

The sentencing was handed down by Justice Sandil Kissoon at the High Court in Demerara.

“I would say that I maintain my innocence. I did not kill Jennifer Persaud and her children,” were the words of Caesar when asked by the Judge if he had anything to say following the verdicts on Friday.

It was reported that Persaud, who owned a liquor store and bar, along with her two sons were discovered in their home with their throats slit. The woman’s body was found on a bed with Afridi on top of her. Jadon, on the other hand, was found on the floor next to the bed.

Caesar was only apprehended by the Police in 2016 for the murders after his reputed wife, Zoey Phillips, told detectives that he had confided in her about killing the family. This was Caesar’s second trial for the murders. His first trial ended in a hung jury in 2019.

During her testimony at Caesar’s retrial, Phillips, who is now 25, told the court that during September 2021, both she and her spouse were unemployed. She said that Persaud and her children lived next door to them. According to her, on the night of September 21, 2012, she and Caesar were in their bedroom when he left and told her that he was going over to Persaud’s home to get money because he was “broke”.

She recalled that when Caesar left their home, he was clad in three-quarter pants. She said that he was carrying a small wooden-handled knife and a pair of gloves, which he had taken from their kitchen. Phillips recounted that her ex-lover gained entry into the woman’s yard through an opening in a zinc fence. She recalled that she went back into their bedroom and about a minute after she looked through the bedroom window and saw Caesar climbing up the stairs and into Persaud’s home.

Phillips told the court that she fell asleep and was awakened by a knocking on the back door. It was Caesar, she added, carrying a cardboard box containing several $20 and $100 notes which amounted to $3000. When Caesar entered their home, Phillips said that he told her he “had to kill Jennifer” because she knew him very well and that she woke up and saw him in her home.

She said that her then reputed husband also told her that he had to kill the children because “they wudda wake up and cry”. The woman told the jury that when Caesar returned home the knife and his pants were covered in blood. Phillips recalled that Caesar took her to the seawall where he threw the knife into the ocean. According to her, he threw the gloves and pants into some nearby bushes.

Phillips said that she finally informed the Police that it was her spouse who had committed the crime. The woman said that on April 22, 2016, she went to the Tuschen Police Outpost where she made a report and requested a restraining order against Caesar.

The now-convicted killer was arrested, she said, adding that during a confrontation between them she reminded him that he killed the family. She told the jury that Caesar told the Police that she was lying. When asked why she kept quiet for so long, Phillips explained that she was afraid of Caesar because he was very abusive. 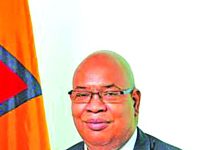