The Elders Group, Friday, said that the will of the people expressed in the March 2 General and Regional Elections and confirmed in the recount “must be respected”.

“An electoral declaration should be made without delay,” the Group said via a twitter message.

Caribbean Community (CARICOM) Barbados Prime Minister Mia Mottley, had expressed concerns that Guyana is still to see an election result well over a hundred days after citizens voted and at the same time expressed determination that democracy must triumph.

The results of the national recount has confirmed that the Opposition PPP/C has won the elections by over 15,000 votes. 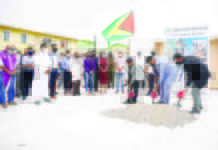