BY JOHN RAMSINGH in Port of Spain

the Trinbago Knight Riders for only the second time in CPL history to start the “Biggest Party In Sport” at the Queen’s Park Oval, Port of Spain.
The Zouks set 163 to win got to 164/4 with 5 balls to spare for a convincing victory by 6 wickets to silence the home crowd. Charles made 52 from 38 balls (6×4, 1×6) and got admirable support from the top order to ensure the Sunil Narine factor didn’t feature. The opening partnership was worth 47 with Charles and Watson (16), then with Andre Fletcher he added 46 for the second wicket to sink the defending champions’ hope of an opening victory.
Narine tried his best with 2 for 25 from his quota, but the poor fielding did not do well in the defence of the just-about-par score against a powerful batting line-up.
Earlier, a pugnacious unbeaten 63 from Darren Bravo saw the defending champions Trinbago Knight Riders (TKR) to the eventual score that looked good at the half way stage.
The visitors won the toss and opted to bowl under the lights on a typical grass-less Queen’s Park Oval pitch and damp outfield, but that decision backfired as the hosts eased to 163/6 from their 20 overs.
Bravo’s 63 came off 44 balls with 2 fours and 4 maximums in front of a sea of red in a true ‘Trini-party’ atmosphere. The stylish left hander added 66 runs in 50 balls with Umar Akmal, 30 (28 balls, 2×4, 1×6) for the fourth wicket after the TKR were in a spot of bother at 58/3 at the end of the 9th over. Hashim Amla, who opened the batting with Brendon Mc Cullum, looked good before he spooned debutant Nitish Kumar to Kyle Mayers on the cover boundary for 26 (21 balls, 2×4, 1×6). Brendon Mc Cullum threatened briefly for 12 (2×4), while Colin Munro scored a-run-a-ball 11.

The Zouks’ quicks got some stick, but it was Shane Watson who was the best bowler of the night. His first 3 overs cost 9 runs and he picked up 2 wickets, while his last over went for 17 runs and he got the wicket of Cooper to end with 3 for 26. Morne Morkel, who got some pace and bounce, picked up the wicket of Dwayne Bravo, but his four overs cost 41. The spinners combined for seven overs for 51 runs with 2 wickets, with Derone Davis (1/14) and Kumar (1/23) reaping the benefits on the pitch that offered a little bounce and turn.
The Trinbago Knight Riders will play their second home game on Friday against the Barbados Tridents from 21:00h, also at the Queen’s Park Oval while the Zouks will travel to Basseterre to take on the Patriots on Sunday, July 3.
Johnson Charles was adjudged Man of the Match. 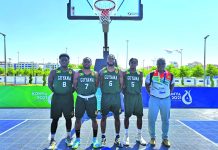 One win, one loss for Guyana at Islamic Solidarity Games 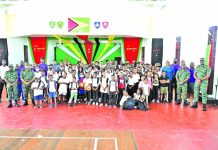 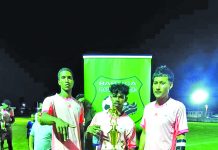 Mother of 2 killed; 3, including 2 children, injured in Linden...