It was the highest quality of female cricket being played at Lusignan and the Georgetown Cricket Club; Berbice defeated GCB Select Under-19 by eight wickets while Demerara thumped Essequibo by 359 runs.

Berbice v Select Under-19
The Berbice captain, Tremayne Smartt led from the front with the ball, capturing 5-9 from seven overs, to dent the Shabika Gajnabi-led Select Under-19 team. Playing under improved conditions, at the Guyana Cricket Club, Bourda, the GCB Select Under-19 team took first strike with openers Mandy Mangru Casey Charles at the crease.
Mangru and Charles went out to face the music against experienced international

players in Tremayne Smartt, Subrina Munro and Erva Giddings. Berbice got off to the perfect start when Charles was out bowled by left-arm seamer, Giddings with the score on 5-1 in the third over. The right handed Mangru was partnered by her captain, Shabika Gajnabi and the duo began mini-resurgence.
Berbice bowlers were on the money, brilliantly led by Smartt and the upbeat Winston Smith. The second wicket fell at 17-2 when Gajnabi was out for five trapped in front by Munroe. Cherry-an Fraser came at number four but she fell at 34-3 after scoring six run. Fraser was out bowled by the brilliant Smartt to become the Windies stalwart’s first victim.
The score 34 became the lucky number for the Berbice team, when Smartt found herself on hat trick removing Charita Mohair for a golden duck. Wickets tumbled at regular intervals for the Select Under-19 when the swashbuckling Africa Gentle

was out caught for a three-ball duck off the bowling of Smartt. After Gentle departed with the score on 38-5, Mangru’s fighting innings came to an end. The opener, Mangru scored 17 runs but she was out caught with the score on 41-6.
GCB Select Under-19 was in deep trouble as the Berbice star studded team chipped away with wickets. After Mangru’s 17 no other batter reached double figures. Eventually, the Select Under-19 was bowled out for 56 inside 28 overs. The well-known Berbician and West Indian World Cup winner, Smartt starred with the ball ending with impressive bowling figures of 5-9 in seven overs including one maiden.
Sherika Campbelle, the cousin of Windies player, Shemaine Campbelle ended with 2-21 in seven overs while Munroe had 1-10 in six overs including two maidens while Giddings grabbed 1-13 in six overs.
The Berbice openers entered the batting crease with intent; Melanie Henry and Marian Samaroo. Select Under-19 got a wicket with the score on 31-1 after Samaroo was out caught for three off the bowling of off-spinner, Mandy Mangru. Henry then showcased a variety of strokes as the Windies selectee, Sheneta Grimmond as the pair continued to take the Berbice team across the line.
Grimmond was found outside her crease and she was run out for a shot-filled 13, including two fours into the leg side. Sherika Campbelle partnered Henry and the pair took Berbice to a comprehensive eight wicket win. Henry was unbeaten on 26 including three fours while Campbelle was unbeaten on one. Mangru was the bowler with the wicket for Select Under-19, finishing with 1-10. Tremayne Smartt was correctly awarded player of the match for her brilliant five wicket haul.

Demerara v Essequibo
In the Demerara runs-fest at Lusignan, Demerara captain Akaze Thompson blasted a masterful 164 that won her the Player-of-the-Match. Notable outstanding performers in the match came from Timeca Wilson who scored 105 Kaysie Schultz who grabbed 5-2 in seven dream overs.
The Demerara team won the toss and opted to bat on the fairly large and slow Lusignan outfield. Essequibo made early inroads, removing Lashana Toussaint for one with the score on 2-1. Toussaint was out bowled by Kumanie Persaud; after adding 44 runs together, Keisha Fraser was bowled by Vinita Balkishun for 10. It was then the Tamica Wilson and Akaze Thompson show as the dynamic duo

added 186 runs in quick time.
The duo made the Essequibians pay for the drop chances by scoring centuries of their own. Wilson scored a brilliant 105 including 11 fours but she was out bowled by Onica Stoby after batting for over two hours at the crease. The Demerara captain went on her merry way smashing a breathtaking and unbeaten 164 that included 15 boundaries. Kaysie Schultz was the other batsman remaining unbeaten on 2, as Demerara scored 380-3 in 50 overs.
When the Essequibians went out to bat, it was a no-contest, from turning up with a small squad they were outplayed by the women in blue, Demerara. The Essequibo team was bowed out for an embarrassing 22 inside 25 overs as not batter passed six runs. Left-arm spinner, Kaysie Schultz was the best bowler with 5-2 in seven overs including four maidens, operating from the bottom end. Latisha Jordan and Heera Singh had one wicket each in a discipline all-round bowling performance. The matches will continue on Tuesday, with Berbice clashing Demerara at Bourda while Essequibo will play The GCB select Under-19. 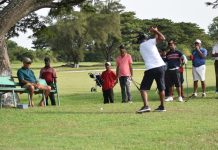 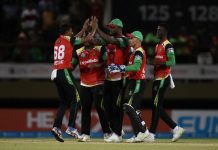 Match 28 of HERO CPL 2022: GAW take on TKR in battle of the heavyweights this evening 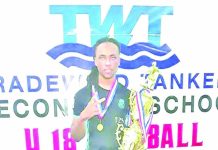