Assistant Manager of the Guyana Amazon Warriors John Ramsingh is urging all the fans to come out in their numbers in an effort create a festive atmosphere at the National Stadium, Providence for the teams four home matches in the “Biggest party in Sport”.
“It is usually said, the 12th man in cricket is the crowd and we are looking forward to everyone to come out and cheer on the home team which will drive the Warriors once again. We don’t want to have a party stand, we want to have a party stadium”, Ramsingh said in a recent interview with Guyana Times Sport.

Warriors will have four home matches from August 17 to 22nd. On the 17th, they play the Jamaica Tallawahs; after which they play arch-rivals Trinbago Knight Riders two days later. The Warriors then clash with the Barbados Tridents on the 20th, and then have their final home match against the St Lucia Stars on the 22nd.
Given the Stadium has a seating capacity of 15,000 the Assistant Manager stated that fans should get their tickets as soonest.
“With the history of fans of the Guyana Amazon Warriors there is always a late rush for tickets and when some are ready tickets are sold out and we don’t want that. Fans we are urging you to please get your tickets early”.
Patrons can purchase their tickets from 09:00 hrs to 17:00 hrs Monday to Friday and 9:00 hrs to 13:00 hrs on Saturdays. Corporate companies/organizations wishing to purchase tickets can contact the ticketing office for further details on how to do so.
The costs of tickets for this year’s CPL games are as follows: RED AND GREEN STANDS – $5,000 GY; ORANGE STAND – $3,000 GY; GRASS MOUND – $2,500 GY.
Car passes for inside the stadium are: $1500 while the one between the stadium and the Ramada Princes cost $500.
The Warriors will have a one week preparation camp commencing on July 25 ahead of their first match in Florida on August 5 against St Kitts and Nevis Patriots.
The Squad includes: Guyana Martin Guptill, Rayad Emrit, Sohail Tanveer, Christopher Lynn, Jason Mohammed, Chadwick Walton, Rashid Khan, Steven Taylor, , Keon Joseph, Gajanand Singh, Roshon Primus Veerasammy Permaul, Assad Fudadin, Steven Jacobs, Steven Katwaroo, Keemo Paul and Muhammad Ali Khan. 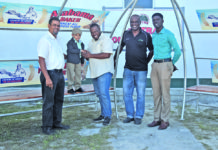 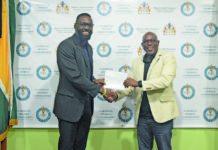