A spirited bowling performance by Demerara helped them pull off a stunning six-run victory against Berbice to win the Guyana Cricket Board’s (GCB) Under-17 Inter-county tournament on Sunday at the Georgetown Cricket Club, Bourda.

Berbice innings was lead by an eye-catching 95 by middle-order batsman Kevin Sinclair who had his team in sight of victory before the lower-order buckled under pressure from some accurate bowling by Demerara.

Set 190 to win from their allotted 50 overs, Berbice were bowled out for 183 in 49.2 overs as national youth player and left-arm spinner Ashmead Nedd led the way with 3-32 from his 10 overs, while captain Bhaskar Yadram took 2-28.

In addition to the Man-of-the-Match performance by Sinclair, who hit eight fours and faced 126 balls in his innings, Kelvon Anderson (28) and opener Javid Karim (27) were the only other batsmen to reach double figures.

Earlier in the day, Demerara’s total was built on vital contributions by several of the batsmen as openers Yadram and Robin Williams (15) added 30 for the first wicket before Williams fell to medium-pacer Sayad Peirbaksh.

The incoming Joshua Persaud and Yadram then carried the total to 59 when the latter lost his wicket for a well-played 33 (3x4s). But that wicket saw the side slip from 59-2 to 69-4 in quick time.

Sayar Hatheramani (24) and Persaud added 49 for the fifth wicket to rescue their team; Persaud eventually fell for 57 (4x4s) with the total on 161-7.

Handy lower-order knocks by Anthony Antonio (16) and Pradesh Balkishun (12 not out) gave Demerara their eventual total.

Over at the Demerara Cricket Club (DCC), Essequibo romped to comprehensive 107-run victory over GCB Select Under-15 team. Set 215 for victory by Essequibo, the Under-15s were skittled out for 107 in 35.4 overs.

When Essequibo batted, their innings did not get off to the best of starts as seamer Daniel Paul had the opposition reeling at 28-2 in the sixth over.

But Smart batting by Orlando Jailall (08) and Bomesh Ramdahin took the total to 44 in the 10th over.

Essequibo had a cluster of wickets falling again as they slipped to 89-5 in the 20th over as Ramdahin fell for 37 (6x4s).

It then took some responsible batting by Reon Venture and Chanderpaul Mohair (28) to put their side in a much comfortable position after which Mohair fell after hitting two sixes and two fours in his 23-ball knock.

A solid 79-run, eighth wicket partnership between Venture and Trevor Collins, who made 34 (3x4s), propped their side to their eventual total.

The right-handed Venture ended on 53 not out, striking four fours and one six. Left-arm spinner Nigel Deodat took 2-15 and Paul supported with 2-29.

In response, the Under-15s lost the talented opener Sachin Singh with just 17 on the board, but the right-handed Andrew Samaroo took the attack the Essequibo bowlers with an aggressive 16 (3x4s) before lobbing a catch to mid-on at 36-2.

A flurry of wickets then fell as the Under-15s failed to orchestrate solid partnerships to challenge the total, as only Yeudisir Persaud (23), Seon Glasgow (26) and Dwayne Dick (16) made notable scores. 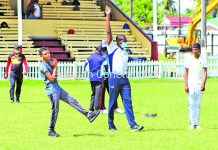 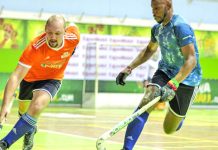 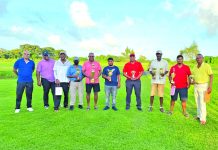