Young Guyanese referee Kenisha Prescott has become the first female match official to take charge of a game at the International Tournoi Paul Chillan in Martinique, and the first to accompany a travelling Guyanese national youth squad, under the Guyana Football Federation’s new technical development plan.

The Guyana Football Federation (GFF) Technical Department’s new policy involves giving as much international exposure as possible to both its young players and referees, in order to accelerate their development and to increase their potential for career advancement in football. Prescott, who is studying for a degree in social work at the University of Guyana, took charge of the Guadeloupe versus Martinique match on March 3 at the Tournoi Paul Chillan, which brought together under-17 boys’ teams from Guyana and French-speaking Caribbean territories including Haiti and French Guiana. “To know I was the first female referee at the ‘PC’ tournament was a good achievement and an honour,” Prescott said in an interview on the Turkeyen campus. “The experience was wonderful. It was a very intense game.” “It’s the first time I have actually been in a big stadium in front of a big crowd, so I was nervous at first, but it was good because I had the exposure, so I know now how to referee when I go to do international games.” Linden-born Prescott’s achievements coincide with International Women’s Day (8th March) and underline the GFF’s commitment to increasing female participation in football at all levels of the game, from playing and coaching to refereeing and governance. The GFF currently has about 30 registered female referees who are active in the game, but is working to increase this number significantly this year.
“We want to bring more young women into football and to give them as many opportunities as possible with a clear development pathway,” said GFF Technical Director Ian Greenwood. “Under our new approach and through developing links across the Caribbean, we are also giving young players and referees like Kenisha the exposure they need at a high level to learn and to progress.” The young Lindener is hoping to follow in the footsteps of internationally-renowned female Guyanese referees such as Dianne Ferreira-James and 2016 CONCACAF Female Referee of the Year nominee Maurees Skeete “I see myself becoming a FIFA referee,” she said. “That would mean that I would go to international matches like the World Cup and the Olympics.” With International Women’s Day in mind, Prescott encouraged other young women to get involved in all areas of football, especially refereeing. “We’re looking for a lot more females to come on, because there is only one FIFA referee we have in the country and it would be nice for others to come on board to make Guyana proud,” Prescott said. GFF Executive Committee member and President of the Guyana Football Referees Council Dion Inniss praised Kenisha’s achievements. “Kenisha is one of the budding stars in refereeing, and we are extremely happy that Martinique experience has open up her eyes to the possibilities that exists once she continues on this path,” former FIFA match official Inniss said. 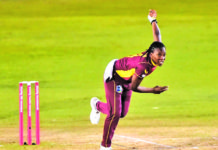 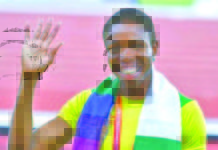 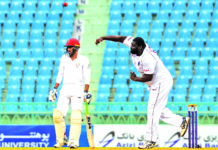 “Cornwall is our most potent spinner,” says Roger Harper