On Wednesday, May 5, we will be commemorating “Indian Arrival Day” – which is still officially dubbed “Arrival Day”, supposedly because the Government wants to acknowledge the contributions and impact of all indentured labour on the incipient creole society formed after the abolition of slavery in 1838. There would be a total of 341,500 indentureds, consisting of 239,756 Indians; 30,585 Portuguese/Madeirans; 42,512 West Indians; 13,355 Africans; 14,189 Chinese; and 1282 “others”. Below, we expand on the economic impact.

The movement for the abolition of slavery and the agitation (in Guyana and in India) for humane working conditions for the indentured labourers left a legacy of sensitivity to the exploitation – economic and otherwise – of labour. In fact, the Trade Union Movement was conceived to agitate for economic justice on behalf of workers, and was launched by Hubert Nathaniel Critchlow in Guyana as far back as 1919, long before political parties appeared on the scene. Most of our modern politicians came out of the Trade Union Movement. The ethnic organisations BGEIA, LCP, NPC, etc., formed coterminously by mostly middle-class elements, were also concerned about the economic status and progress of their members. This was truer of the nascent Indian middle-class, which had a greater number of members from the world of business than the African/Mulatto Middle class, which had sought improvement of their lot through education for jobs in Government services and the professions.

Specialisation
The historical development of the colony, by and large, led to ethnic economic specialization, and this was to have far reaching consequences. Within a decade of the abolition of slavery, the large swathe of Africans who had left the plantation to found the Village Movement were channelled into becoming an urbanised workforce of lower civil service clerks, messengers, transport workers, dock workers, shop assistants, artisans, masons etc. The unbroken wave of internal migration, continuing to the present, soon created a large African urban underclass that could be used to depress urban wages.
Many Africans went into the hinterland to prospect for gold, and opened up a new industry. Those Africans who remained on the sugar plantations constituted the majority of factory workers, who were then locationally separated from the mostly Indian field workers. When the bauxite industry was developed following WWI, the workers recruited were primarily Africans. The Portuguese and Chinese, small in numbers, also gravitated to the urban centres directly after serving their indenture contracts, with some remaining as shopkeepers in the newly formed villages. The majority of Indians, even after indentureship, remained on the plantations or formed rural settlements near the plantations – focusing primarily on rice (which became an industry), vegetable cultivation, and cattle-rearing.
Economic competition was sustained with the rural-to-migration continuing as a constant feature of the colony’s development, since the towns were promoted as centre of “civilised” life and higher standards of living. This rural African migration precipitated severe contradictions in Georgetown, as the newer arrivals depressed wages – producing an African underclass that grew sharply as economic opportunities stagnated. The early success of the Portuguese migrants in business, which squeezed out many Coloured/African entrepreneurs, led to several African–Portuguese riots, notably in 1848, 1856 and 1888. The Portuguese were adjudged by the Africans to be granted special privileges and to be unfairly moving ahead.

Competition
On the sugar plantations, the interminable flood of new immigrants – including from the West Indies and Africa – depressed plantation wages. Contrary to what some ideologues in the present are preaching, there was no significant economic competition between Indians and Africans in the 19th century. It was the beginning of the movement of Indians into the elite, urban-centred occupations after the end of indentureship in 1917. However, that precipitated the greatest stresses in the society, some of which are still to be resolved. The Indians, building on their successes in rice, cattle- rearing and petty retailing, began to open businesses in Georgetown by the 1920s, and also to enter the independent professions of medicine and law. These were very highly prized occupations in colonial society, and they helped to define status, and when some Indians began to percolate into the Civil Service by the 1930s, the Coloured/African elite began to feel threatened.
The Indians were seen as a threat for a variety of economic reasons – in addition to the cultural and political ones. These were pointed out by the Mulatto/African middle class. Firstly, the Government had financed part of the cost of bringing indentured immigrants to Guyana from the national treasury, into which the Africans had paid taxes. This was akin to rubbing salt into an open wound, since the many African leaders had convinced the average African that the immigrants – but especially the more numerous Indians – had undercut their leverage to bargain for greater wages on the plantations after the abolition of slavery. In fact, the majority of Africans had decamped the sugar plantations by 1848, after the failure of their 1846-47 strike for higher wages at a time when there were more Portuguese, West Indian Africans and Africans from Africa as indentureds than Indians. We have also written before of the cost-constraints on the Guyanese sugar planters. 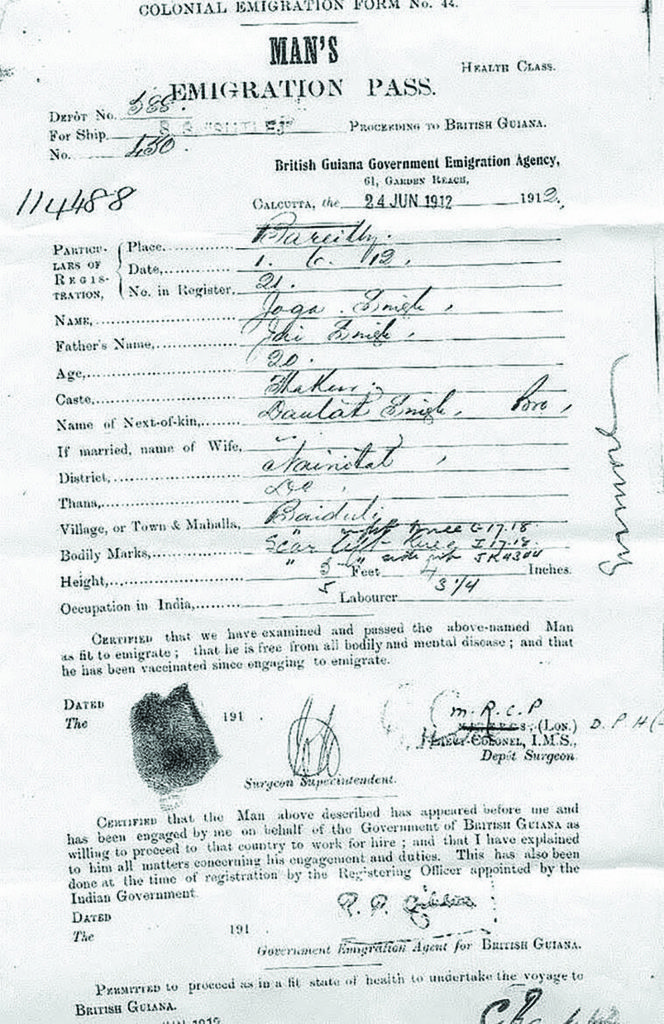 Secondly, Africans feared that the Indians, with their immigrant drive for economic advancement, coupled with their greater numbers (by the end of indentureship), would become so economically dominant that even if they were to occupy only their proportionate share of the valued economic platforms, Africans would be overwhelmed. This fear increased as the Indians slowly began to follow the path that was earlier trod by the rural African to the urban centres. Unlike as with the earlier African migrants, because of their distinctiveness, the Indians stood out for continued comparison. The fear was mixed with the scorn of cultural superiority: the African resentment against the Portuguese, was turned to the Indian.
This resentment in the African/Coloured population was very entrenched by the beginning of modern political mobilisation in 1950, and exploded in the 1960s when Martin Carter, channelling Fanon, claimed, “a city of clerks turned a city of men’.