…as tournament opens in grand style

The second annual Petra Organised Limacol Round Robin Knock-out Football Tournament kicked-off in emphatic style on Monday evening at the Georgetown Football Club (GFC), Bourda, with Mahaica Determinators and Guyana Police Force FC battling to an exciting 2-2 draw in front of a small but appreciative crowd.

A brace by Determinators’  Eion Abel and goals by Police’s Dwayne Charles and Quincy Holder were the highlights of the feisty encounter that could have easily seen a different scoreline if both sides had taken their chances in the game that was played under the lights.
Police, the stronger team on paper, were the favourites heading into the match were sent in a state of shock in the second minute when Abel latched on to a loose ball just outside the penalty area, powering it into the lower left of the net.
The lawmen eventually began growing in stature, creating some eventful set pieces but striker Kevin Boston failed to seal the many chances created.
Boston induced a corner with a shot from inside the box which brought a penalty.
The stage was now set for Police to equalise but Ch

arles sent the ball towering over the goal.
Charles then redeemed himself in the 40th when he curled the ball into the top right to end an action-packed and exciting first half.
Like the first half, the East Coast of Demerara based unit began with a positive attitude.
After quelling an assault by Police, Abel led a solo counter-attack by dribbling two defenders then wrapping his left foot around the ball, to place his team ahead once more  in the 56th.
One minute later, the Eve Leary unit threatened the suspect goal keeper, who deflected the ball into the path of Holder and he made a simple tap-in for the equaliser.
Both sides continued the engrossing battle in search for the winning goal but all efforts proved futile.
Up to press time the second match of the double-header between Riddim Squad and Camptown FC was scoreless. (See full report in tomorrow’s edition of the Guyana Times) 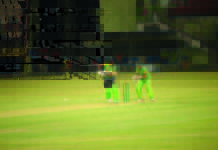 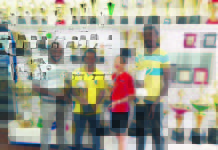 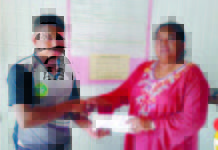