It seemed to be a day to make an international return to cricket as the duo of Sunil Narine and Kieron Pollard combined to power the West Indies to a hard fought four-wicket win over South Africa in the first match in the Ballr Cup Tri- Nation Series at the Guyana National Stadium, Providence on Friday.

Watched by approximately 8,000 spectators which represents just above half of capacity at the stadium, Sunil Narine bowled a mesmerizing spell of off-spin bowling on his return to International cricket to end with career best figures of 6-27 from 9.5 overs, the best by a West Indian spinner in a One Day International. Narine’s brilliance left the visiting South Africans losing seven wickets for 28 runs to be rattled out for 188 in 46.5 overs.
It was then a mature innings from Pollard, who made a run-a ball 67 not out that guided the West Indies to 190/6 to win by four wickets with 11 balls to spare.
West Indies Captain, Jason Holder (10 not out) stroked the winning runs, a confident cover drive for four to seal the much needed opening victory for the home team.
Johnson Charles and Andre Fletcher trudged to the crease to begin the West Indian reply to a total that seemed small but would be challenging due to the typical low and slow track at Providence and the overcast and humid weather conditions that prevailed all match. 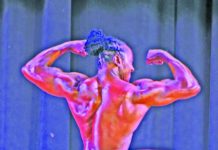 Everything on track for year-end staging of Mr Guyana competition 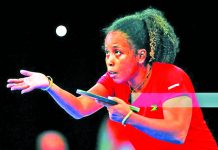 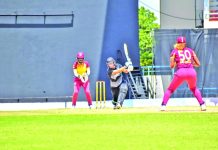