Home News PPP/C Govt working in the interest of all Guyanese – Teixeira tells...

In response to calls from United States Congressmen Albio Sires and Hank Johnson for the People’s Progressive Party/Civic government to ensure that every Guyanese benefit from the nation’s wealth, particularly that from the oil and gas sector, Minister of Governance and Parliamentary Affairs, Gail Teixeira related that the government is working in the interest of all Guyanese.

She said that the PPP/C’s elections manifesto outlines the plans for the development of Guyana and that the programmes implemented since taking office has been focusing on ensuring that every Guyanese benefit.

“In fact, if one looks at since we’ve come into government in terms of COVID relief to every household across Guyana, in relation to increasing the cash care program for every child registered in school, the increase in the school uniforms for children across Guyana including the COVID relief to the Amerindian villages of $1.5 billion, that we have been moving to ensure that all Guyanese are benefiting from the wealth of our country prior to oil during oil and after oil,” the Minister said in a video statement.

Congressman Johnson, representing Georgia’s 4th District, released a statement on Wednesday saying that he has been following the issue of flooding across the country and called on the government to ensure that every Guyanese, irrespective of their ethnicity, benefits from the country’s wealth.

Teixeira reiterated that the government has been doing everything in its power to ensure that every Guyanese benefits from the wealth.

In relation to the flooding, the APNU/AFC has been accusing the PPP/C of discrimination in the distribution of the flood relief supplies.

“We are not here to discriminate against anybody. But we’re here to represent people who need and so the point their opposition has carried is that some people aren’t getting flood relief that they should be getting. We have had an assessment with CDEMA (Caribbean Disaster Emergency Management Agency) with certain UN organizations, with civil society, going region by region to assess the state of the damage and people in need. We’ve given out 1000s and 1000s of hampers, hygiene kits and cleaning materials and so, no one has been left behind. Persons who may not have gotten those who were not flooded. So it is not a situation where everyone could get but there are people who suffered tremendously, and they are not only now in certain areas after a month that water is going down, after livestock and people’s homes were damaged,” she said.

The Minister added that the administration is pleased that the US Congressmen are monitoring Guyana and assured that her government will continue, as the democratically elected government, to stand by the Constitution and protect the rights of all Guyanese regardless of who they voted for and for what ethnic group they belong to.

The APNU/AFC has also been complaining about the lack of dialogue with the government on key areas of interest while labelling the Ali led administration as “installed”.

“I urge the current government and leaders of the opposition in the National Assembly to work together towards further strengthening Guyana’s democracy and building a more inclusive nation,” Congressman Johnson urged in his statement.

Similarly, Sires – who chairs the US Congressional Sub-Committee on the Western Hemisphere – urged the government to ensure all Guyanese benefit from oil wealth and for the advancement of inclusive governance.

Governance Minister Teixeira, reminded that Article 13 of the Constitution talks about parliamentary democracy and participatory democracy adding that her government believes in that. However, she said that in order for the Opposition to get a seat at the table they must first recognize the legitimacy of the PPP/C government.

“We have no issue with the calls by the two gentlemen in relation to all Guyanese benefiting. We are committed to the Sustainable Development Goals, we’re committed to Article 13 of our Constitution, we’re committed to constitutional rule of law and participatory democracy. But it cannot be the rule of those who refuse to accept democracy and those who do not accept the will of the people of our country who elected the People’s Progressive Party/Civic…we look forward to the APNU/AFC taking a mature political position of recognizing the PPP/C as the legitimate government of our country and then the opportunities for dialogue and a number of issues become opened. So, we wish to assure friends in the United States that we are committed,” she said. 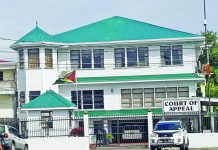 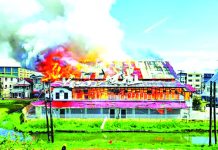