Scores of people gathered at the Lyken Funeral Parlour on Norton Street, Newburg, Georgetown on Tuesday to mourn the loss and pay their final respects to prison officer Odinga Wickham, who succumbed after being shot by a prisoner while on duty during the July 9 Camp Street Prison riot and fire.

Among those gathered to pay their respects to the deceased was embattled Director of Prisons (ag), Gladwin Samuels.
Relatives of the dead prison officer were in tears as they each went into the funeral parlour to view their loved one for the last time.
Wickham was described by his friends and family as a cheerful and positive individual.
Thus far, Police are still hunting the criminals responsible for his death.
Four prisoners identified as Mark Royden Durant, Uree Varswyck, Stafrei Hopkinson Alexander, and Cobena Stephens, out of the initial six who escaped lawful custody on the day that Wickham met his demise, are still at large.
Meanwhile, the Guyana Police Force on Tuesday reissued wanted bulletins for the remaining 10 escapees who are on the run after the breakouts from the Camp Street and Lusignan Prisons.
The Police Force said it was “appealing to members of the public, relatives and friends to give any relevant information as to the whereabouts of these escapees so that they can be captured and returned to the prison”.
Also an appeal is being made to the escapees to surrender to the Police or relevant authority, to avoid any serious confrontation that is likely to result in the use of force.
“All information will be treated with a high degree of confidence and also the rights of those escapees will be respected and upheld,” said the Police. 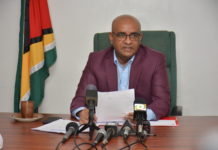 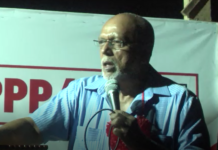 “You can’t run a country through vindictiveness” – Ramotar

Miner charged for wounding another with cutlass