It was a one sided affair on Wednesday, as Finance Minister Winston Jordan moved a motion in the National Assembly confirming tax waivers for British oil company subsidiary Tullow Guyana.
The Parliamentary Opposition – Peoples Progressive Party – was not in the National Assembly on Wednesday, having announced they are boycotting while the very legal status of the Government depends on how the Caribbean Court of Justice (CCJ) rules in the No Confidence Motion cases.
“By now this is familiar territory for the house,” Jordan said. “This is probably the fourth or fifth time I’ve come to the house to affirm what has been placed in contracts and have become an obligation for the government under section 51, premised on the Petroleum and Exploration Act of 1986.”
According to Jordan, that order empowers him as Finance Minister to modify the application of tax laws towards oil companies holding Production Sharing Agreements (PSA) with the government; specifically, as it relates to income, corporation and property taxes.
“Tullow first became involved in oil exploration (in Guyana) in 2008, when the company obtained equity in the Georgetown block and participated in the exploration Guyana essay, operated Jaguar one well in 2012. As in many of these activities, this well failed to reach its target depth, as safety was a concern.”
He added that in 2016, Tullow and Eco signed a petroleum agreement with Guyana, to explore the offshore Orinduik block. “Tullow acts as operator in that block and holds a 60 per cent interest. In 2017, they safely acquired 3D surveys. Good quality data was achieved, enabling drilling activities to be planned in 2019,” the minister said.
Jordan noted that along with its partners, Tullow is aiming to proceed with drilling in the Orinduik block in 2019, which would expand its commitment to Guyana’s development agenda. He pointed to its plans to drill at least two wells – Joe and Jethro- this year.
Section 15.1 of Tullow’s contract states that “subject to Article 32 and except as provided in Article 15.2, 15.8 and… Article 15.1, no tax, value added tax, excise tax, duty, fee, charge or other impost shall be levied at the date hereof or from time to time thereafter on the contractor or affiliated companies in respect of income derived from petroleum operations or in respect of any property held, transactions undertaken or activities performed for any purpose authorized or contemplated hereunder.”
There are exceptions, such as import duties at rates set out in the Customs Act and subject to Article 21 of the contract; income unrelated to what is derived under the agreement and rent due to the government for any land rights granted or assigned.

Plans
Tullow had in February announced it was bringing forward its drilling programme from the previously scheduled end of the year to the second quarter. It had announced that the Jethro prospect would be drilled in June.
On the other hand, its Carapa prospect in Kanuku will be drilled in the third quarter. It is understood that the net cost of the Jethro well is US$30 million, while the Carapa well will cost US$20 million.
Tullow’s partner in the Orinduik block, Eco Atlantic, had announced that drilling on the Joe prospect will begin in mid-July of this year. They had announced that the Stena forth drill ship will move directly to the Joe, after it finishes drilling the Jethro Lobe Well in the Orinduik block.
It is understood that the Joe is located in approximately 650 meters of water and will cost Eco approximately US$3 million to drill. A recently published report from international company Gustavson Associates has estimated that the well has a 43.2 per cent chance of success.
The Orinduik oil block is just a few kilometres from Exxon’s discoveries in the Liza and Payara fields. It is under the administration of Eco Guyana and Tullow, who signed a 10-year Petroleum Prospecting licence and Production Sharing Agreement with the Guyana in 2016 French firm Total E&P Activities Petrolieres entered the fray in 2017; partnering with Eco with the option to get a 25 per cent share in the block.

Warning
Opposition Leader Bharrat Jagdeo on several occasion had warned that all contracts/agreements/concessions granted by Government after December 21, 2018 would be reviewed if the PPP wins the next General and Regional Elections. On December 21, 2018 a no-confidence motion was passed in the National Assembly and brought the Government tumbling. The Government has since moved to the court to determine the validity of the motion, which was already certified by the Speaker of the National Assembly.
The Opposition Leader has maintained since December 21, 2018 the Government is merely in a caretaker mode.
On March 22, a divided Appeal Court ruled that a majority of 34 votes would have been needed to validly pass the No-Confidence Motion brought against the A Partnership for National Unity, Alliance For Change (APNU/AFC) Government last year.
Acting Chief Justice Roxane George had, in January, upheld the December 21, 2018, passage of the No-Confidence Motion, ruling that in Guyana’s 65-member National Assembly, a majority is 33. This, however, was appealed by Attorney General Basil Williams.
While Justice Rishi Persaud dismissed the appeal and conferred with the ruling of the High Court, his colleague appellate judges allowed the State’s appeal.
The matter has since engaged the attention of the Caribbean Court of Justice, which is set to rule on the cases soon. 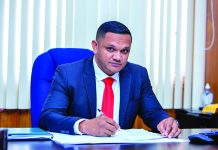 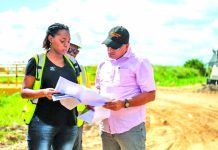 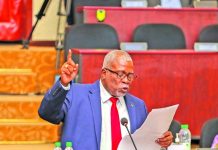