Home News US Election 2020: Tighter than expected vote may take days to resolve

BBC – The outcome of the US presidential election is on a knife edge, with Donald Trump and his rival Joe Biden neck and neck in key swing states.

Mr Trump, a Republican, claimed to have won and vowed to launch a Supreme Court challenge, baselessly alleging fraud.

Earlier Mr Biden, a Democrat, said he was “on track” to victory.

Millions of votes remain uncounted and no candidate can credibly claim victory as yet. There is no evidence of fraud.

With the nation on edge, the final result may not be known for days.

More than 100 million people cast their ballots in early voting before election day, setting the US on course for the highest turnout in a century.

What are the results so far?

Mr Trump has defied the pre-election polls to do better than predicted, but Mr Biden is still in the race and the overall result is not yet clear.

In the US election, voters decide state-level contests rather than an overall, single, national one.

To be elected president, a candidate must win at least 270 votes in what is called the electoral college. Each US state gets a certain number of votes partly based on its population and there are a total of 538 up for grabs.

The president is projected to have held the must-win state of Florida – a major boost to his re-election bid.

The BBC projects Mr Trump will win another conservative sunbelt state, Texas, where the Biden campaign had dreamed of an upset victory.

But Mr Biden could snatch Arizona, a once reliably conservative state. Fox News and the Associated Press have projected Mr Biden will win that state and CBS News, the BBC’s US partner, says it is leaning the Democrat’s way.

A loss for Mr Trump in that once reliably Republican state would be a potentially serious setback.

The Rust Belt battlegrounds of Pennsylvania, Michigan and Wisconsin – which propelled Mr Trump to the White House four years ago – still look as though they could tip either way.

Pennsylvania is considered crucial for Mr Trump if he is to stave off defeat.

Other key states such as Georgia and North Carolina are also toss-ups.

Mr Trump will keep hold of Ohio and Missouri, known as bellwether states because they have so often predicted the eventual winner, according to the BBC’s projection.

Mr Trump is also projected by the BBC to win Nebraska, though Mr Biden picked up one vote there in the electoral college, which could turn out to be crucial.

No surprises have emerged yet in the other states.

Control of Congress – the two-chamber legislature – is also at stake. As well as the White House, Republicans are vying to hang on to a majority in the Senate. The House of Representatives is expected to stay in Democratic hands.

What are the candidates saying?

Mr Trump hosted an election night gathering inside the White House with about 100 guests.

He went on to allege “major fraud on our nation” without providing evidence, adding: “We’ll be going to the US Supreme Court.”

“We want all voting to stop,” the president said, apparently meaning that he wants to block the counting of postal ballots, which can be legally accepted by some state election boards after Tuesday’s election.

Millions of ballots have still to be counted and there is no evidence of fraud.

His rival’s campaign condemned the president’s statement as “outrageous, unprecedented, and incorrect”, calling it a “naked effort to take away the democratic rights of American citizens”.

Earlier, at about 01:00 local time, Mr Biden predicted in a speech to supporters in his hometown of Wilmington, Delaware, that he would be victorious.

The Democrat said: “We feel good about where we are, we really do. I am here to tell you tonight we believe we’re on track to win this election.”

He added: “We’re going to have to be patient until the hard work of tallying votes is finished and it ain’t over until every vote, every ballot is counted.”

As his opponent spoke, Mr Trump tweeted from the White House: “We are up BIG, but they are trying to STEAL the Election. Twitter labelled the post as potentially “misleading about an election or other civic process”.

A new “non-scalable” fence was put up around the White House ahead of election day. Businesses in the nation’s capital and also in New York City boarded up their premises due to fears of unrest. 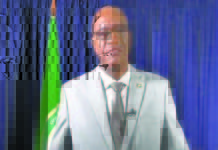 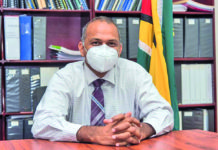 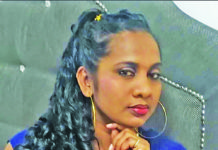