The two daughters who conspired with two male friends to kill their father were slapped with a murder charge and on Thursday appeared before Magistrate Zameena Ali at the Sparendaam Magistrate’s Court.

Roger Manikam’s two daughters – Nalini Manikam, 18, and his adopted daughter, 12, both of Nonpareil, East Coast Demerara – along with Veeram Lall, also known as “Adam”, 24, a High Court bailiff who resides on West Bank Demerara, and Devon Brown, 23, a taxi driver from West Coast Demerara were all jointly charged for his murder.
The Police Prosecutor told the Court that Manikam and Lall shares a relationship and that the heinous crime was allegedly orchestrated by Lall sometime before that fatal night on April 2.
It was further related that on the night in question, the two girls lured their father, 64, into the kitchen where the elder daughter pounced on him and delivered the fatal chop to the back of his neck using an axe. They then reportedly summoned Lall to the scene, who in turn called Brown to assist in disposing of the body. The four then secured the body in construction plastic with a piece of rope, loaded it into Brown’s car and took it to the Coldingen Railway Embankment, ECD, where they dumped it at the side of the road.
The three adults were remanded to prison while the adopted daughter will be held at the Juvenile Detention Centre in Sophia. They will be making their second Court appearance on May 6.
Manikam’s body was found by residents in the area around 06:30h on April 3, with wounds to the head and upper neck. He was bound and his head was covered with a plastic bag.
Detectives became suspicious of the dead man’s daughters after they realised that the rope serving as the clothes line in the yard of the home was identical to the one used to secure the plastic around the man’s head.
The Police took the two young ladies into custody and during interrogation they broke down and admitted to killing him, claiming that he was a “nuisance” to them, subsequently providing Police with a detailed account of the murder.
The young woman’s boyfriend was also arrested and confessed to being an accessory to murder. He had been previously detained for questioning in relation to the murder of Regent Multiplex Mall owner Ganesh Ramlall, but was released shortly thereafter. Relative to information the three suspects gave the Police, Brown was also arrested. The suspects were later taken to the scene, where they identified the spot where they had dumped Manikam’s body.
They also took investigators a short distance away where they dumped incriminating materials such as bloody sheets and clothing.
In one instance, the man’s daughters alleged they committed the act because their father would frequently drink and abuse them; however, Nalini Manikam later provided a conflicting statement to reporters, telling them that her father does not imbibe in alcohol.
Family of the dead man related that Manikam was ill and due to the medication he was using, he could not use alcohol. The family also quashed the allegations of sexual abuse made by the older daughter, saying that she made the claims in an attempt to get away with the murder.
The family have since reported that the murder was committed in an attempt to inherit a large sum of money the man acquired from the sale of his sawmill. 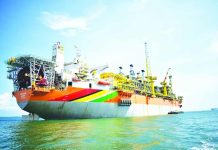 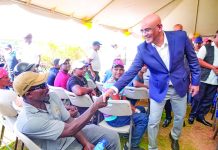 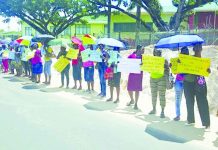