…GECOM should be guided by the primary law of our country – Opposition Leader
…”President, Cabinet will not resign” – Harmon

Ministry of the Presidency Director General Joseph Harmon has ruled out the President and Cabinet resigning in accordance with what the Constitution of Guyana says and the calls that have been made by the parliamentary Opposition.

Harmon revealed during a post-Cabinet press briefing on Wednesday that President David Granger, instead of heeding calls to dissolve Parliament and set a date for elections, is waiting on the Guyana Elections Commission (GECOM) to advise him.
“In general terms, what the information is…the President has advised the Leader of the Opposition that he, nor his Cabinet, will not be resigning, and that the Constitution provides for the President and Government to remain in office until the new Government and the new President is sworn in,” Harmon said, in answer to questions about whether there will be any resignations.
Pertaining to the question of the dissolving of Parliament, Harmon said this is a matter which rests with the President. He added that the present dissolution of Parliament has to, of course, do with advice which he receives from GECOM about their readiness to conduct elections. “So a question of a date for elections and dissolution of Parliament is based primarily on the readiness of GECOM. Once that is given to the President, he will make a decision with respect to a date and dissolving Parliament”.The new GECOM Chair, Retired Justice Claudette Singh, is expected to meet with Granger today along with all the GECOM Commissioners.

“I am glad that the entire Commission is meeting with the President. As a holder of the constitutional office of Leader of the opposition, I intend to request a meeting with the Commission. I expect the Chairperson and commissioners will want to hear our views too.
As regards the President naming a date in mid-December for elections (as reported by local news entity Demerara Waves) would mean that the President will be acting in flagrant disregard of the CCJ’s ruling and in violation of article 106 of our Constitution. If this is true it would seem that it is designed to influence the use of what we know would be flawed list emerging from a rushed, unscrutinized house to house registration that will deregister tens of thousands of Guyanese voters. This will result in chaos in Guyana.
Gecom should be guided not by the unilateral action or unconstitutional desire of the President but by the primary law of our country,” Opposition Leader, Bharrat Jagdeo 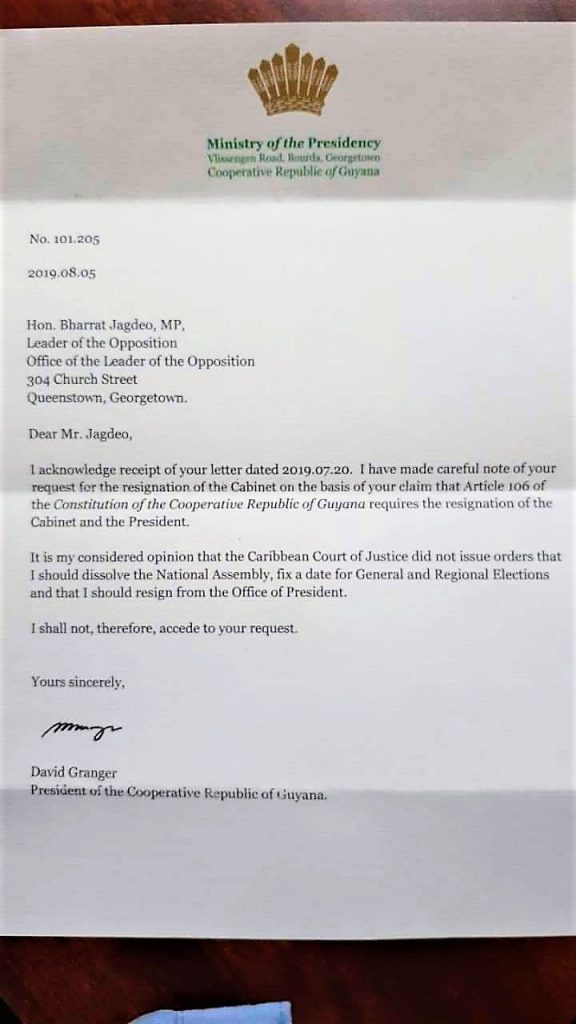 Response to Opposition Leader
Opposition Leader Bharrat Jagdeo recently wrote to President David Granger demanding his resignation. In the letter, Jagdeo reminded the President that since July 12, 2019, the CCJ delivered its consequential orders on the matters of Zulkficar Mustapha versus the AG and others, Christopher Ram versus the AG and others, Bharrat Jagdeo versus the AG and others and Charrandas Persaud versus Compton Reid and others.
Jagdeo had listed several conditions for the President to accede to, including that the President and his Cabinet immediately resign and that the President issue a proclamation dissolving Parliament.
He had also called for the President to fix a date for the next General and Regional Elections, not beyond September 18, 2019. The President, however, responded to the Opposition Leader on Wednesday, saying that he will not resign nor dissolve Parliament, since the Caribbean Court of Justice did not issue orders to that effect.
It was only recently that Public Security Minister Khemraj Ramjattan, who is also a lawyer by profession, described Articles 106 (6) and (7) of the Guyana Constitution as “legal fiction” when he was called out by PPP Member of Parliament Juan Edghill for not complying with its provisions, that is, for the Government to resign and have elections within three months.
“We’re not going to resign! We are not going to resign because we are still… there’s absolutely nothing in the Constitution that indicates a formal resignation. That was gone through by the CCJ and it was even gone through by the High Court”.
Article 106 (6) of the Constitution states: “The Cabinet including the President shall resign if the Government is defeated by the vote of a majority of all the elected members of the National Assembly on a vote of confidence”.
Meanwhile, Article 106 (7) states: “Notwithstanding its defeat, the Government shall remain in office and shall hold an election within three months, or such longer period as the National Assembly shall by resolution supported by not less than two-thirds of the votes of all the elected members of the National Assembly determine, and shall resign after the President takes the oath of office following the election”.
A No-Confidence Motion (NCM) was passed against the Government on December 21 of last year. However, elections were not held and there was no resignation. Instead, Government went to court unsuccessfully arguing that the NCM was not validly passed.
The case reached the CCJ, where the regional court ruled against the Government, but stopped short of issuing an order fixing an election date. Instead, CCJ President Justice Adrian Saunders had said that when the NCM was passed on December 21, 2018, Article 106 of the Constitution had immediately been activated.
At present, GECOM is before the courts after a challenge from accountant Christopher Ram, who is seeking an injunction on the House-to-House Registration exercise. The Court is slated to rule on this matter on August 14, with a meeting between new GECOM Chair Retired Justice Claudette Singh and her commissioners reportedly scheduled for the next day. 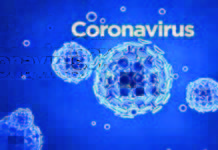 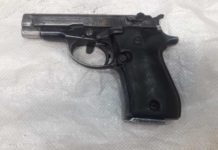 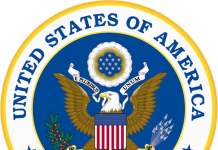 US Embassy urges stranded Guyanese in the US to apply for...