Home Features Ramsammy’s Ruminations The cesspool of lies continue – the Mexico rice contract was a...

But even as I read that report, and as much as I wanted it to be true, I knew that the story was suspect. Mexico imports some 800,000 tons of rice and paddy, about 80 per cent of its needs, mostly from America. In fact, because Mexico is part of the North American Free Trade Area (NAFTA), imports from any other country outside Canada and America must be surcharged with tariffs, unless America waives any objection. I also knew that the price that Mexico could import rice and paddy from other trade partners, such as Vietnam, India, Thailand, Argentina and Uruguay would make Mexico among the lowest priced market for Guyana.

Mexico is, indeed, a potential market for Guyana’s rice and paddy. Mexico, particularly with the belligerence of Donald Trump about unfair trade, is looking to reduce its dependency on America to meet its rice demand. But the problem is that Mexico imports long grain rice with two to five per cent broken at about US0 per ton CIF or even lower. Vietnam and other countries have been offering even lower prices. This is why Guyana has difficulties recovering the Haiti market because Guyana is unable to compete with Vietnam there.

For export to Mexico, a miller would have to use about 32 bags of paddy to provide one ton of five per cent broken long grain rice. It means that the miller will export rice to Mexico at about G00 per bag of paddy. When one subtracts transportation and other processing expenses, the miller is really selling one bag of paddy to Mexico for about 00 or less. The end result is that rice farmer cannot get more than 00 per bag of grade A paddy; a price that will mean a farmer will lose on his investment. This is why the Mexican market remains a difficult proposition, unless Mexico pays Guyana a better price than India, Thailand, Vietnam, Argentina and Uruguay.

The A Partnership for National Unity/Alliance For Change (APNU/AFC) promised new markets to add to the 35 international markets that existed at the end of 2014 and to pay farmers 00 per bag of paddy. People like Nagamootoo, Ramjattan and people like Turhane Doerga, blitzed TV stations in Georgetown, Berbice and Essequibo promising 00 per bag. Now rice farmers are reeling from discriminatory policies implemented by APNU/AFC. The loss of the Venezuelan market caused the price per bag of paddy to sink to the bottom of the barrel. Production has reversed downwards. This week Alessie and Doerga have closed their operations in Guyana. The man who promised to take the rice industry to new heights and to pay rice farmers unbelievable prices is a victim to APNU/AFC’s mismanagement of this important industry.

It is now almost 18 months since Prime Minister Moses Nagamootoo returned to Guyana after one of the numerous joyrides and jubilantly announced they would be replacing the squandered Venezuelan rice market with a new market in Mexico. Nagamootoo lied then and has been totally silent since. He has nothing to say now that the Agriculture Ministry again lied that Guyana would be exporting 150,000 tons of rice and paddy to Mexico this year.

The rice industry and rice farmers have become victims to the callousness and recklessness of the APNU/AFC Administration. It is unconscionable that they lie at every turn to the farmers. But rice farmers and millers are resilient and will survive, even if the Government has stupidly abandoned them. Just as they have found a way to export rice to Venezuela, rice farmers and millers will overcome their difficulties, in spite of APNU/AFC. (Send comments to [email protected] or to my FB page) 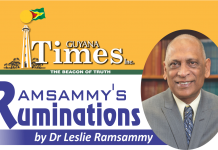 The right to refuse COVID-19 vaccination comes with consequences 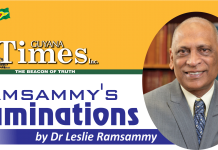 Duncan must apologise, resign or be censured for deeming Caricom leaders gangsters

GECOM reforms are imperative for democracy