…over 2100 transactions C&O so far – Commissioner

Almost one year after the passage of the No-Confidence Motion (NCM) against the coalition government, the Guyana Elections Commission (GECOM) is only now scrambling to full a number of key posts, with only five months remaining before next year’s March 2 polling day.
This is according to Government-nominated Commissioner at GECOM, Vincent Alexander. He told reporters, following Tuesday’s three-hour statutory meeting, that they have advanced certain aspects of the Commission’s work.

This, he noted, includes reactivating the work of the admin committee to look at a number of vacancies that have not been filled. These are: a logistics manager, an Assistant Chief Elections Officer, a research person, and someone responsible for voters’ education.

“Obviously, those vacancies have been affecting the capacity of the Secretariat to do its work. The admin committee is scheduled now to meet on Tuesday so we can advance the process of filling those vacancies,” he posited.
From the December 2018 passage of the NCM— which triggered early elections within three months— GECOM has come under heavy criticism for its failure to be in a state of readiness to hold General and Regional Elections.
In fact, in its ruling on the consolidated NCM cases, the Caribbean Court of Justice (CCJ) said that all constitutional actors, including GECOM, must abide by the provisions of the Constitution.

“The Court must assume that these bodies and personages will exercise their responsibilities with integrity and in keeping with the unambiguous provisions of the Constitution, bearing in mind that the No-Confidence Motion was validly passed as long ago as 21 December 2018,” the Trinidad-based regional court had stated.
According to Article 106, Cabinet including the President shall resign and call elections within three months of the successful passage of a No-Confidence Motion. This meant elections were due since March 21, 2019. But while the court noted that timeline was on pause as a result of the legal proceedings, its June 18 ruling validating the passage had re-triggered the elections deadline.
However, Alexander explained that the Elections Commission could not have done any work to fill these vacancies since it was without a Chairman for several weeks. However, these vacancies were present since last year and GECOM was only without a Chair for about one month in July.
The CCJ had also ruled in June that the 2017 appointment of then GECOM Chair Retired Justice James Patterson was unconstitutional. This resulted in Justice Patterson’s resignation late June. After several weeks of meetings between President David Granger and Opposition Leader Bharrat Jagdeo and their representatives, current Chair, Retired Justice Claudette Singh, was appointed on July 26.
“These vacancies have been there since last year. Work on the vacancies were held up when we did not have a Chairman,” Commissioner Alexander contended.
Meanwhile, he went on to say that the Operations Committee is continuing with its work and will be meeting again on Friday to look at issues relating to the data from the scrapped House-to-House (H2H) Registration.
He said that the encoding process of that data is ongoing with all transactions having gone passed the first stage.
With regards to the Claims & Objections (C&O) exercise which commenced on October 1, Alexander noted that there has been an “average response” to it.
However, Opposition-nominated Commissioner Sase Gunraj told reporters after the meeting that Chief Elections Officer (CEO) Keith Lowenfield updated them that more than 2100 transactions have been recorded thus far during the C&O exercise.

“I understand from the CEO that there were 2127 transactions for Claims and two Objections so far,” Gunraj disclosed.
He further related that they are still trying to get more details on other aspects such as the H2H data, as well as the overseas fingerprint cross-matching, before any decisions are taken.
According to the Opposition-nominated Commissioner, the encoding (entering data into GECOM’s database) of the H2H data is schedule to finish on the October 15.
Last week, Government-nominated Commissioner Charles Corbin had told reporters that the encoded data will be available for scrutiny before the C&O exercise concludes in November.
“What we can tell you is that it will be for 21 days [for scrutiny]. So we’re assured that all of the [H2H] data will be available 21 days before the end of the C&O processing period for public scrutiny,” he had said.
GECOM was forced to bring the controversial H2H Registration to a premature end on August 31, by which time it had obtained in excess of 370,000 registrants. It was then decided that the new data obtained will be merged with the existing National Register of Registrants (NRR) Database – something which the Opposition People Progressive Party (PPP) has been against.
In fact, fellow Opposition Commissioner Bibi Shaddick on Friday said they are trying to clarify what aspect of 370,000+ new registrants gathered during the H2H is going to be put up for public scrutiny.
According to Shaddick, while they believe that only the data on first-time registrants should be used, the Elections Secretariat cannot disaggregate that information because they are still in the process of encoding the H2H data.
In the meantime, the Elections Secretariat has sent some 180,000 registrants overseas for cross-matching of fingerprints. This was done to ensure that there is no duplication of the data obtained from the H2H exercise and those already in the NRR database.
The results from that first set is expect to be back soon and the second and final set of data to be cross-matched by fingerprint experts will be sent. 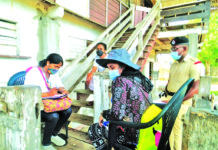 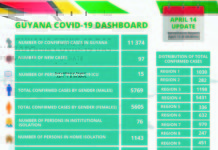 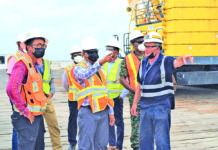 Guyana Shore Base to complete US$16M expansion by October