The publication of the list of voters recorded during the discontinued House-to-House Registration is not only outside of statutory law, it can lead to the General and Regional Elections’ results being invalidated. This is according to former Attorney General Anil Nandlall. In an interview with Guyana Times, Nandlall noted that the Guyana Elections Commission’s determination to publish this list separate from the Preliminary List of Electors (PLE) had very serious repercussions, as it can be used in an elections petition to overturn the election results. “Now I understand that GECOM is bent on publishing a list of names generated by the truncated House- to-House exercise. As you are aware, there is already a Preliminary List of Electors (PLE), which has been public, which is subject to a Claims and Objections (C&O) process.

“Any attempt to use a list not provided for by the law, to form part of the official list of electors, will render the entire list of electors as perverted and unlawful and if we go to an election with such a list, it exposes those elections to be set aside in an election petition, because important statutory procedures would have been violated,” Nandlall explained. The former AG noted that there was no legal way the PLE could be updated, except by Claims and Objections, an exercise currently ongoing. He also explained that data collected from another source could not be merged into this preliminary list. “There is no provision in the law for another list to be circulated. Elections is a statutory process. That means every step in the process is governed by a statutory provision. The law is that these statutory steps must be strictly complied with. Any violation of any of these statutory procedures can result in the elections being set aside. That is the nature of election law. “The publication of this list generated by the Houseto- House exercise is not catered for at all in the law. No one knows what use is going to be made of this list. If the intention is to use this list to merge it to the OLE, then it will be a merger that is not sanctioned or provided for by the law and it will be a contamination of the OLE by data not provided for in the law.”

Nandlall cited Sections 11 and 21 of the National Registration Act. Section 11 (1) states that “No person shall be registered in more than one divisional register or more than once in any register established under Section 9”. Section 21, on the other hand, speaks to persons who procure or induce another to procure, voter’s registration in more than one register or more than once in a single register. This offence carries a fine and imprisonment of six months. “It would appear as though this list is coming out separately. Now if you look at Section 11 and Section 33 of the National Registration Act, you will see that duplicate registration constitutes a criminal offence,” he said. “This list is replete with duplicate registration. This list is a dossier of criminal offences. And those who participated in those offences are liable to be prosecuted under the National Registration Act.” Demands But with the list of names already making the rounds, People’s Progressive Party (PPP) Executive Secretary and chief scrutineer, Zulfikar Mustapha, has written GECOM Chief Elections Officer (CEO) Keith Lowenfield, demanding that the list be withdrawn. In his letter, Mustapha reminded Lowenfield of the statutory process to acquire the OLE that will be used in next year’s elections scheduled for March 2. He noted that nothing in the law allowed for the publication of another list. “The PPP has been informed that the GECOM Secretariat, upon your directions, has published the list of persons registered during the recently-truncated House-to-House Registration exercise. The reason for the publication of this list is unknown.” The letter added that there was no provision in the law for two separate lists or for a merger of data from these two sources. “In this instance, the PLE was derived from the NRR. The only method provided for in the law for this list to be updated is by C&O. In the circumstances, we respectfully demand that you withdraw from public circulation the list,” the letter stated. Mustapha also informed Lowenfield that the letter would be copied to GECOM Chairperson, Retired Justice Claudette Singh, “with the expectation of her urgent intervention, should our demand be ignored”. On Tuesday last, GECOM Commissioner Charles Corbin had announced that GECOM had completed the encoding process for data gathered from the recent House-to-House Registration exercise. He had also announced that fingerprints would be sent overseas to be cross-matched and that information would be published from Thursday. Soon afterwards, the three GECOM Commissioners nominated by the PPP made it clear that no decision on the issue was taken by the full commission and that Tuesday’s meeting had ended with more questions than answers on publishing the names. To date, Chairperson Singh has been silent on the issue, leading Opposition Leader Bharrat Jagdeo to urge her to be more assertive in bringing clarity to disputes at the Commission. Since her appointment, Justice Singh has had no interview engagements with the media corps on the work GECOM is doing. 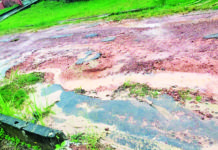