Story and photos by Brandon Corlette

A small but vocal crowd, led by the Guyana U-19 team that are in camp to depart for the regional tournament in Trinidad from April 15, saw Guyana dance to their third consecutive victory in this T20 Blaze tournament.
Guyana won this encounter over the wounded Windward Islands by 18 runs; after they posted 105-8 and restricted the visitors to 87-8 in 20 overs.
It was once again the brilliance of Erva Giddings, who grabbed 3-17 in four overs, bowling 17 dot balls in her match-winning spell, to dent the Windward Islands, as she copped a third Player-of-the-Match award in as many matches.
Winning the toss, Windward Islands Captain Afy Fletcher opted to field first under the lights at the National Stadium Providence. Sheneta Grimmond began in fine fashion cracking fast bowler Akeira Peters through extra cover for a boundary. Two balls later, the adrenaline got the better of Grimmond when she was out, bowled for four.

Guyana’s most experienced duo in Tremayne Smartt and Shemaine Campbelle were then together at the crease and took the score to 70-2 in 12.3 overs, adding a valuable 66 runs. After getting herself in the groove, Campbelle hit one down the throat of long-on for a 33-ball 28, striking two boundaries. Prior to her dismissal, she soaked up 14 dot balls in her innings that included 14 singles.
Smartt, who had scores with the bat in all of the T20 Blaze matches thus far, opened her account with an exquisite back-foot punch through the cover region, off the Windward left-arm seamer. Playing with a compact technique, Smartt hit a sound 40 from 43 balls, including five top-notch boundaries.
She fell at 77-3 in the 14th over, running past a Qiana Joseph delivery to end up out, stumped. One run later, Giddings lost her wicket via the run-out route and Shabika Gajnabi in the same Swayline Williams over was trapped leg-before for four after she survived a dropped catch.
The Guyanese scoring rate halted when they lost five wickets between overs number 13 and 16 for only 17 runs. Windward Islands were into the game after the main Campbelle-Smartt partnership. Akaze Thompson, who is yet to score, was run out for one. The struggling Melanie Henry looking to up the ant, was out caught at deep mid-wicket for four, leaving Cherry Ann Fraser (17) to push Guyana over the 100-run mark.

Entering the final over, Guyana were 96-7; a Fraser boundary straight over Fletcher’s head brought up Guyana’s 100 milestone before she was run out. The innings ended prematurely as Guyana reached 105-8 in 20 overs. Bowling for Windward Islands, Swayline Williams had 2-21 as the Guyanese batters failed to bat with maturity with the exception of the mainstays in Smartt and Campbelle.
In Windward Islands’ run chase, they had a steady start produced by openers Stacy Ann Adams and Nerissa Crafton, who added 35 runs together. Off-spinner Mandy Mangru got the first wicket when she took a return catch to dismiss Crafton for a run-a-ball 22.
Giddings, who was hit for a boundary in her first spell, returned with a vengeance; she took two wickets in two balls, trapping Fletcher and Juliana Nero leg-before. Windward Islands were in all sorts of trouble as the fired-up Giddings wreaked havoc. Thompson removed Stacy Ann Adams for 18, caught in the covers by Campbelle.

Giddings, the girl from Alness Village, Corentyne, Berbice, continued her brilliance with the ball, bagging her third wicket in her third over: bowling on target and trapping Glendeen Turtin for four, at 53-5. Guyana were on course to victory as Thompson removed Qiana Joseph for a duck at 54-6.
It was a drought in the scoring column for the visitors as they ended on 87-8 in 20 overs. Giddings starred with 3-17 while Thompson had 2-7 in four overs. Guyana, who have three wins in four matches, will be hoping to take their momentum through to today’s match when they face the mighty Barbados team from 19:00h local time. 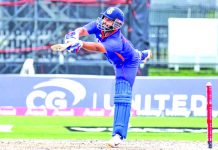 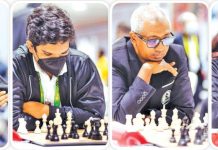 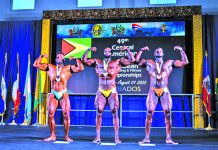