As the Green Machine locked horns in an engrossing encounter against Trinidad and Tobago’s Calypso Warriors at the St Stanislaus College ground on Carifesta Avenue on Saturday, media operatives asked Minister of State, Joseph Harmon, whether Government would assist the Guyana Rugby Football Union (GRFU) to acquire their own ground.
The affable minister responded that he is positive Government is willing to support the sport of rugby in Guyana.
“I’m positive that we [Government] can do something for rugby. I believe the (Guyana) team needs as much support as they can get; and you can see (from) my presence here (that) I believe they [Green Machine) will do well. The Government is fully supporting rugby,” the Minister of State declared.

This revelation means that the Guyana Rugby Football Union (GRFU) could finally have the breakthrough for which they have long been waiting and praying. The GRFU have, for years, been calling on Government and the private sector for support, given that this is one sport that can help the image of Guyana transcend international borders.
Minister Harmon said he has had discussions with the relevant stakeholders on how Government can support Guyana’s ruggers. “I have just had conversations with Director of Sport and the rugby officials, and I believe that we can do better — much better — with a little technical support; and I would really want to commit to that technical support for the team,” he  disclosed.
Overcast conditions did not dampen national support for Guyana’s ruggers, as was evident by the sizable crowd and appreciable encouragement it shouted to the Guyana side; factors which had obviously enthused the State Minister.
“I’m happy with the turnout, too!” he declared. “(I had thought that) with this weather, you would have a problem with support; but you can see the people are out here.” He added, “It is good for Guyana. Competition is always a good (thing). I think the team is doing well, and I want them to continue doing so”.  Factually, the reason for the game being moved to the St Stanislaus College ground on Georgetown’s Carifesta Avenue was because the current rainy season had left the National Park flooded during preparation stages. And although that situation is not new to the GRFU, it is understood that if the match had been played at the National Park, that occurrence could have caused the GRFU to be sanctioned by Rugby’s governing body.
The Green Machine went on to defeat the Soca Warriors 24-17 to retain their Ruby Americas North (RAN) South Zone title. With the win, Guyana will now travel to Mexico City for their July 1 clash with the Mexicans — their second in as many years – for the RAN overall title. The last time the two sides met, Mexico steamrolled the ‘Green Machine’ 32 – 3.
Historically, Guyana’s Green Machine has been one of the most consistent teams in the Caribbean, winning the Men’s Sevens Title eight times, which has seen the team recording a presence in the popular Hong Kong Sevens.
Moreover, in the 15s format, the Green Machine’s 30-27 victory against the USA (South) in 2014 — when they won their maiden NACRA 15s (now known as RAN) title in Atlanta — arguably has to be their biggest achievement yet. 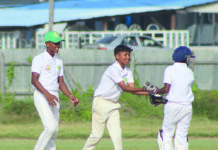 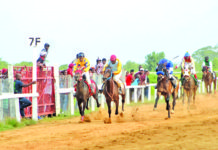 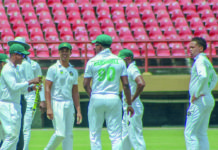