Dear Editor,
In an article captioned “Bring me the evidence” attributed to the Chairperson of the Guyana Elections Commission (GECOM), Justice (ret’d) Claudette Singh (Sunday Chronicle, January 19, 2020), it was stated that she said to date there is no evidence of persons registered 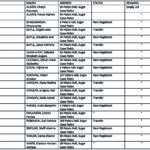 during the House-to-House Registration are non-existent or do not live at the addresses listed. The article reported that the Chairperson stated that “them not being home, does not mean they do not exist” and was quoted as saying “We have no evidence that they do not live at the addresses which they gave”. The Chairperson further went on to challenge persons to prove that the Revised Voters’ List is flawed.
Well, here is the evidence (listed below) which proves that many persons on the Revised Voters’ List are on empty lots and this is from only one Division – 412235B – Sugar Cane Fields, Peters Hall. This revelation may only be the tip of the iceberg and proves the folly of GECOM proceeding with the House-to-House Registration without scrutineers from the PPP/C, with the agenda of tampering with the list of electors for the rigging of elections.
Thousands of people have been demanding that the data for the House-to-House Registration should not be incorporated into the RLE and these findings have shown they are vindicated. It is now up to the Chairperson of GECOM to act decisively.

Please help us thwart this direct assault on our democratic right

Why does Granger cabal need all these electronic and telecoms data?