Home Features ‘The Evolution Of Writing In English By And About East Indians...

Following in the wake of her magisterial work on Roy Heath in ‘Aftermath of Empire: The Novels of Roy A.K. Heath’, published by the University of the West Indies Press, Ameena Gafoor has produced another book of immense import to the literature of Guyana but particularly and more importantly this book is a timely addition to the slim list of scholarly works on the writings of East Indian of Guyana.
‘The Evolution Of Writing In English By And About East Indians Of Guyana, 1838-2018’ has been compiled with meticulous care to details and great concern for the preservation of the literature of East Indians. This work, coming 180 years after the arrival of East Indians to Guyana, flies in the face of sins of omission and sins of commission with regards to the composition of the literature of the region. The quantity and quality of literature that was bought here by the people who came is an indication that the Indians who came were not mere ‘illiterate peasants’ and that their contribution to the literature of the region was slighted and undervalued. The quantity of the literature that came was described by Dr. David Dabydeen as a ‘body of texts of staggering physical bulk and philosophical dimensions…The Ramayana rolls on to a hundred thousand lines, much longer then Virgil’s Aeneid or Homer’s Iliad. The Mahabharata quadruples that sum; the Vedas when collected form eleven huge Octavo volumes, whilst the Puranas extend to two million lines’. Furthermore, the literature of the Quran and the significance of Haffizs who could recite the Holy Quran from memory must be added to the above.
Dabydeen further elucidated, in his preface to this compilation, that he brought quantity into the equation so as ‘to highlight that the act of ignoring these texts is an act of monumental bias’. Other scholars have denounced this bias in Caribbean literature and the shunning of such from the mainstream of Caribbean literature. Long before Dabydeen’s pronouncement and condemnation, Emeritus Professor Kenneth Ramchand declared in his groundbreaking book, ‘The West Indian Novel and its Background’ that ‘writers are not writing about Indians for the sake of emphasizing Indianness but more to create understanding and deepen meaning of the many cultures which co-exist’. Neglecting to appreciate such a contribution for so long has robbed the region of a resource that could have done more for the region than the efforts of Caricom and the portrayal of Carifesta, all put together.
One of the reasons for Gafoor’s most recent publication is ‘a significant effort to set the record straight with respect to Indian Guyanese literacy, and literary scholarly production’ (Dabydeen).
Other reasons, as if justification is necessary, cited by the author include the commemoration of two landmark events namely the centenary of the abolition of Indian Indentureship to Guyana and the 180th anniversary of the arrival of Indians from India to Guyana. Further, there is no known comprehensive compilation of the literary and artistic efforts of the East Indian and as such this book is the best form of commemoration.
Gafoor spells out the objectives of this work saying that ‘this bibliography seeks to capture the imaginative and objective writings of East Indians in Guyana including statements by Guyanese artists as well as statements by art historians and critiques by art critics of the significant works of visual arts produced by Guyanese artists of East Indian extract…includes works of Anthology, Literary Criticism, Critiques on the Visual Arts, Creative Writing, Social History, Education, Governance, Politics, Journalisms, Accounting and Financial Management’.
More importantly, this work is organized in chronological order to better trace the development of the body of writings’. This timeline serves many purposes including events that may have has ‘an impact on the consciousness of East Indians in Guyana and, in some instances, prompted the writings’ and facts that possibly ‘shaped the lives of East Indians as well as citizens in modern Guyana’.
Ameena Gafoor is the founder of The Arts Forum and editor of The Arts Journal. This book is dedicated to and built on the legacies of the struggles and sacrifices of ‘our foreparents’. The cover image is designed from a painting ‘Journey into the Dark Circle: the Arrival’ by Philbert Gajadhar.
‘The Evolution Of Writing In English By And About East Indians Of Guyana, 1838-2018’ by Ameena Gafoor was published by Hansib Publications.

The science of COVID-19 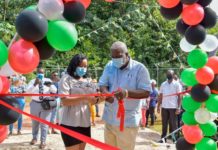