Last week we started the conversation about upstream activities in the oil and gas sector. This week we continue that conversation by delving into what is oil and gas exploration in layman’s terms.

What is exploration?
Exploration involves a search process for hydrocarbon deposits beneath the Earth’s surface. Petroleum geologists have mastered the art of looking for hydrocarbon deposits where conditions are similar to those where earlier deposits were found. There was no doubt that Guyana has hydrocarbon deposits. All of its neighbours connected by the sea do have active oil and gas wells, namely Venezuela, Trinidad, and Suriname.
A standard technique, called seismic surveys, is used to initially analyse the rock formation to ascertain if and when they should drill “wildcat wells”. A wildcat well is an exploration well to confirm the readings from the seismic surveys. Some of these wildcat wells will fail and some will succeed. In Guyana’s case, the “Liza 1” well drilled on behalf of Exxon was a success, while the “Eagle 1” well drilled on behalf of CGX was a failed wildcat well. (see map below) 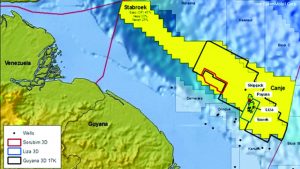 In Guyana’s case, the main operator of the Stabroek Block is a company called Esso Exploration and Production Guyana Limited (EEPGL), which is owned by Exxon with a 45% interest, while Hess Corporation (USA) has a 30% interest, and the Chinese, by way of a company called CNOOC Limited, has a 25% interest. The operators secured from the Government of Guyana, by way of a Petroleum Prospective Licence which was signed in June 1999 by the then President Mrs. Janet Jagan, a lease to explore for oil and gas.

Drilling
Drilling is physically creating a hole in the ground, called a “borehole”, which can either be a success or a failure. If it is a success, as in the case of the “Liza 1” well, then it will eventually become an oil and gas well. If it is a failure, as in the case of the Eagle well, it is capped (sealed) and abandoned.
Specialist rig contractors and service companies in the “OIL SERVICES” business do this work. The specialist rig contractor that spudded (first bore) the well in March 2015 for Exxon was one of the world’s largest offshore drilling contractors, based in Switzerland. That company is called Transocean. They used a drill-ship called Deepwater Champion to accomplish the task. On any well site, there can be as many as 30 different service contractors providing expertise to the operator. I was reliably informed that there was no Guyanese company in that initial team, but several Trinidadian companies were contracted to offer critical support services to the specialist rig contractors during the days of exploration, earning valuable income for that country ‘s economy vs. the Guyanese economy.
The drilling of oil wells can be relatively simple (vertical for miles), or more complex, involving greater depth and some horizontal drilling. My understanding is that the “Liza 1” well was a complex well that involved the design of a snake-shaped oil well that required some amount of horizontal drilling to maximize the drainage potential of the well. (See picture below) 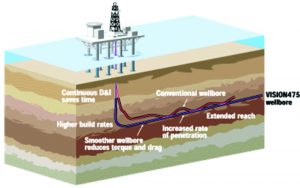 Next week, I shall explain the terms Dutch Disease, Midstream and Downstream. 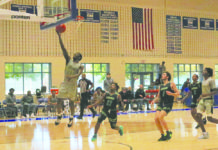 Destined for a higher call, Stanton Rose aims for the NBA 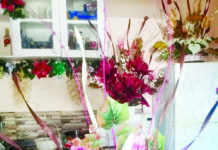