Home Sports Time for the WICB to become champions!

“We started this journey … we all know we had … people were wondering whether we would play this tournament. We had a lot of issues, we felt disrespected by our board, Mark Nicholas described our team as a team with no brains. All these things before the tournament just brought this team together.”
Those were the words of a gutted West Indies captain Darren Sammy as he spoke after the Caribbean side won their second Word T20 tile in emphatic style in India on Sunday.
Usually after such a tremendous feat, captains, players, support staff and well-wishers all would be in an extremely jovial mood, but this was certainly less of the case when the Sammy vented his frustration at the haphazard approach the West Indies Cricket Board (WICB) has adopted in dealing with the region’s top cricketers.
Over the years, the board and the players have always found some way to be a part of a conflict, which often results in catastrophic consequences, as we can all remember the various “pull-outs” from tours.
Even before the World T20, the players threatened not to partake because of an issue with the division of the prize money.
Some may say these players are selfish, greedy and do not have West Indies cricket truly at heart as they chose to play in lucrative T20 tournaments around the world instead of plying their trade for their respective countries at regional tournaments.

But let us be fair, cricket has evolved into an actual profession, and frankly the WICB either cannot afford to pay these players high salaries or they are simply unwilling. Either of the scenarios presents a situation where undoubtedly talented players cannot be adequately rewarded for their exploits; so inevitably they will be lured to play in financially rewarding tournaments.
The rift between players and board goes beyond just money as they seem to be several logistical mishaps by the board.
Sammy revealed a totally embarrassing issue regarding them not having uniforms on the eve of the tournament.
He stated “We had a new manager in this tournament in Rawle Lewis; he had never managed any team before. He came here, we were at a camp in Dubai, but we had no uniforms, no printed … he left Dubai, went to Kolkata, that’s where he started. The trouble he went to, to get us in this uniform.”
Combined with the other issues mentioned early, this certainly would create an unhappy environment for professionals and by all accounts, warrants the board being put to the sword by the players.
Though the argument will be put forward that Sammy’s utterances could have been done in a more diplomatic manner, the board has long now always been “in discussions” and yet hardly any long standing solution is ever found, so it resulted in the idiosyncrasies that plague regional cricket, justifiable being  aired to the world.
Finally, what would have to be the most heart rendering dilemma in the current dispensation between board and players is that upon reaching the final, the WICB offered no congratulatory sentiments to the team.
Sammy disclosed,” I really want to thank the heads of CARICOM, throughout this tournament they have been supporting the team, we’ve got emails, we’ve got phone calls, Prime Minister [Keith] Mitchell [from Grenada]. He sent a very inspiring email for the team this morning [before the final] … and I’m yet to hear from our own cricket board. That is very disappointing.”
In a statement on Monday, Secretary-General, Caribbean Community (CARICOM), Ambassador Irwin Larocque congratulated the teams on their victories as it demonstrated their ability to overcome the challenges they faced.
2016 has been an extremely productive year for West Indies at ICC World Tournaments, as they have won all the titles (Under-19 50-over World Cup, Men’s and Women’s T20) in one calendar year and in a normal sense, the phrase “the future is bright for West Indies Cricket” would be used, but with the current modus operandi of the WICB, that future looks dull.
WICB president Dave Cameron announced that he would meet the players after the IPL at the annual review in June to find a “common ground” where the “best” players can represent the region in all format.”
As supporters, one must remain optimistic about that meeting and hope the WICB get their act together and steer West Indies cricket in the right direction. ([email protected]) 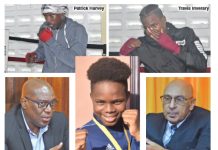 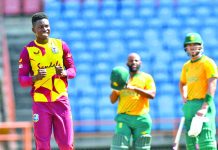 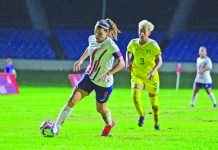